The opening ceremony for the Washington D.C.’s newest museum was officially opened with the ring of a bell. President Obama and First Lady, Michelle Obama were assisted by 99 year old Ruth Bonner, a daughter of a slave, in ringing a 130 year old bell, known as the “Freedom Bell.” The bell has been newly restored and is on loan from Williamsburg First Baptist Church, one of the first black churches founded in America.

In 1776, slaves and freedmen weren’t allowed to hold their own religious services. But a committed group, led by an enslaved preacher, Gowan Pamphlet, met in secret for a number of years. Gowan Pamphlet was punished and beaten several times when the church was discovered. The church persevered, and by 1791, having grown to over 500 members, they petitioned the Baptist Association for membership and have continued as an active congregation to this day.

The funds for the bell came from the women of the church in celebration of the congregation’s centennial in 1886. The bell, however,  fell into disrepair over the years and hadn’t been run in many decades. The Colonial Williamsburg Foundation assisted in raising funds to restore the old bell and the work was completed in February. In October, the church is inviting anyone who wishes to sign up to come and ring the bell, or do so virtually. The church’s website has a video of the rededication service in February. At the very end, there's a wonderful sequence of church members and dignitaries ringing the bell for the first time.

Including the bell as part of the ceremony for the African American History Museum makes sense. I posted about the large number of religious artifacts and themes included in the new museum’s collections. In 1863, when news broke about Abraham Lincoln’s Emancipation Proclamation, church bells were rung spontaneously in one town after another. Though First Baptist Williamsburg’s bell came later, its association with what is most likely the earliest African-American church makes it a fitting addition to the event. And ringing the bell was an important symbol that the work of dealing with the trauma of slavery from America’s past is still unfinished. 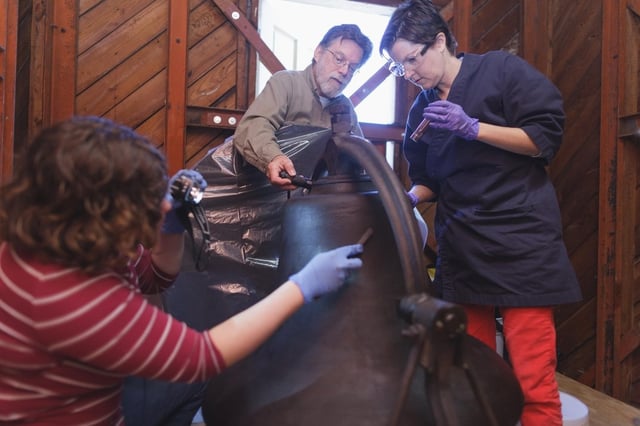