Ganesh and His Symbolic Objects

Visiting the Sackler Museum in Washington DC, I took a closer look at some of the permanent collection. The floor with examples of Hindu deities was far more interesting having the benefit of some basic research while we worked with the Austin Hindu Temple. As I expected, there was a very expressive Ganesh statue. This one dates from the 12th Century. It comes from Southern India, the Karnataka state, which is well known for its historic Hindu temples.

Ganesh is the deity associated with new beginnings and good fortune. According to the museum’s text, in this statue, he is holding an axe, a noose, his own broken tusk, and a handful of sweets. The reason he’s holding most of these objects seems reasonably apparent, but various sources offer insight to the full meaning of these objects. The noose is used to pull a dear one closer, or to rope and pull back someone who strays. The hatchet is to slice away unnecessary bonds or attachments. The sweet meats are a particular symbol associated with Ganesh, as his corpulent body attests. He’s holding these not to eat them but to offer and share with others. 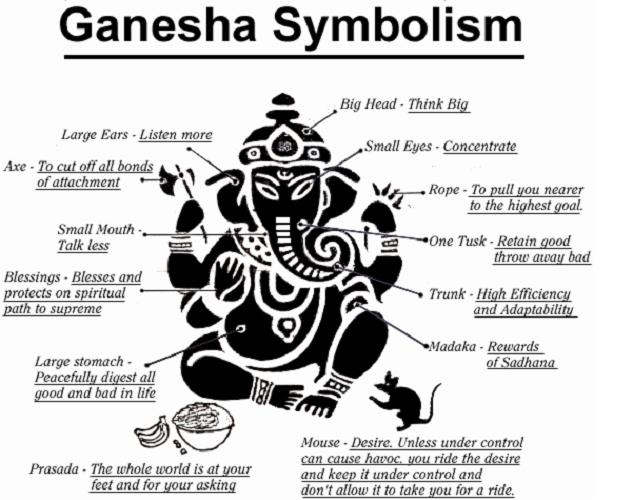 This chart comes from Lotus Sculpture, a dealer in Hindu and Buddhist Statuary.

I needed more explanation about the broken tusk. Apparently, it has at least two main origin stories. One suggests he was fighting off another deity who wished to see his father, Shiva, who was sleeping. Though Ganesh was having he better of the fight, his opponent threw an axe at him. Instantly, Ganesh recognized the weapon. It had given to his opponent by Shiva, his father. Rather than disgrace the axe, he let it slice off his tusk, sacrificing a part of himself to honor his father. Another version suggests he tore off the tusk himself in order to have a pen with which to write sacred texts. In either case, the broken tusk is symbolic of self-sacrifice for the greater good or a higher calling.