Decades of denial is the only explanation. On campus a small, I mean really small, plaque was finally placed by the turtle pond in 2007 to commemorate the victims of the University of Texas mass shooting in 1966. The text on the bronze plate was more cryptic than revealing: “a memorial to those who died, to those who were wounded, and to the countless other victims who were immeasurably affected by the tragedy.” And that was it. It wasn’t until today, 50 years later, that UT finally dedicated a significant memorial to the victims of the UT Tower mass shooting.

The community spent decades avoiding the inevitable. Current UT President, Greg Fenves noted in his presentation today that immediately after the shooting, the idea was to just move on and try to forget the tragedy. He acknowledged we now know it was wrong. In past years, I do recall seeing profiles of some of the heroes of the day, but there was nothing on the campus to fully acknowledge the shared horror and grief shared by a stunned community on that fateful day. 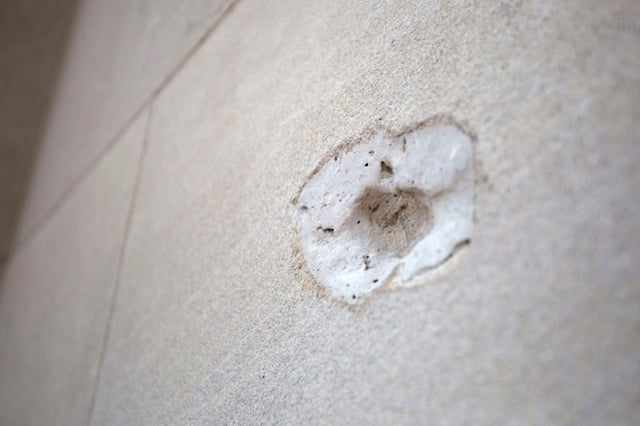 Until today, bullet holes like this one the south facade of the UT-Austin tower were the most noticable marks from the tragic shooting on August 1, 1966 - Photo by Miguel Gutierrez Jr./KUT News.

Today, on the 50th anniversary time on campus stood still, literally. The clock on the UT tower stopped at the exact time the shooting began and will remain at 11:48 for a full 24 hours. The tower, brightly lit at night, will go dark this evening. A massive granite stone with the names of all the victims inscribed was officially dedicated in a somber ceremony near the same peaceful turtle pond with the previous small plaque nearby. 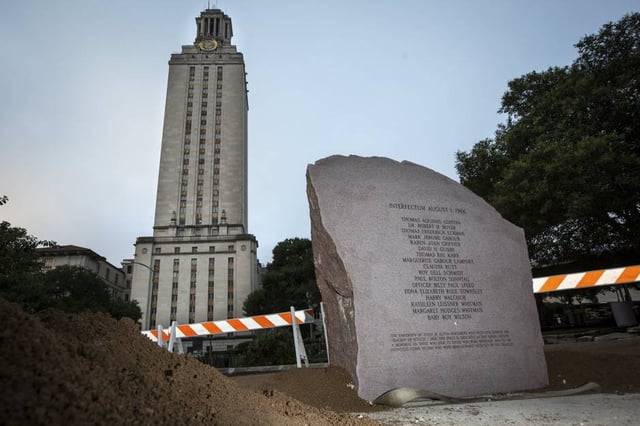 It is truly ironic that at the very moment the UT community has finally come to commemorate the shooting, a new law dubbed “campus carry” is taking effect. In Texas, holders of concealed gun permits have been allowed to have weapons in many locations, but college campuses have always been off limits. The state legislature, responding to a major push from a vocal and organized lobby, tossed out many limits on where guns owners could carry their weapons.  Colleges were given a year to prepare for start of campus carry. That moment arrived today. We can only pray that another memorial to gun victims won’t be needed anytime soon.