The magnificent church in Copley Square, Trinity Church, is a major architectural landmark completed in 1877. Architect Henry Hobson Richarson was celebrated in his day, and his influence on late classical and early modern architecture is unmatched. My professor used to note that Richardson, even more than Frank Lloyd Wright, left such a mark on American architecture, there’s actually an architectural style, Richardsonian, named after him. 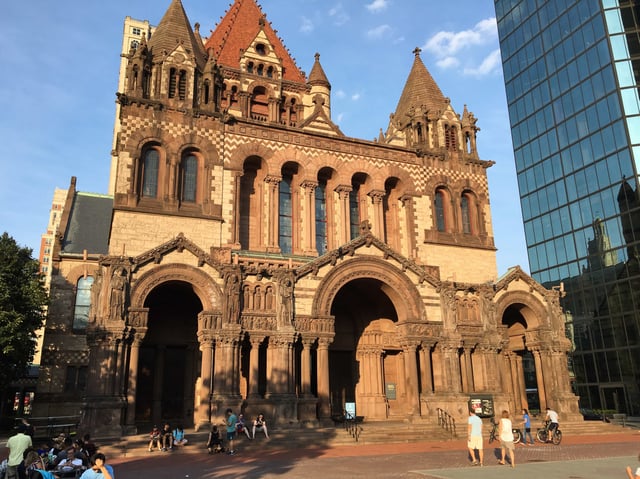 It was late afternoon on a Sunday before I could get to Copley Square in Boston. The low evening light on the exterior made the polychromed stones nearly glow.   I noticed the main door was open for an evening service, so I respectfully slipped inside. I was quite self-conscious, I really was there for the building and not the service. I sat in the last row in the back, sinners’ row, and looked around trying not to make myself conspicuous to the small group of worshippers assembled around the chancel.

That’s when I noticed that the end two rows were decidedly different from all the other seating in the nave. At first glance, the pews were identical, with no major differences. But the experience sitting in the back at Trinity was different than other churches. (I confess, this isn’t the first church service I’ve attended more as an architect than a worshipper!) The sight lines were great. I realized that anyone in the end rows was actually getting an elevated view. That left a feeling of importance, of some confidence that I was, indeed part of the service, even so far from everyone else. 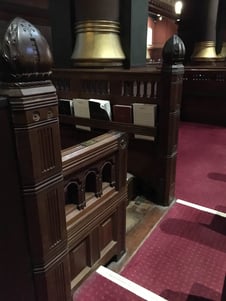 That’s when I looked closer and saw that the end pew was two steps up all along the back row. The one in front of it, one step up. There actually were a few minor adjustments to make the raised pews fit without drawing attention to them. I noticed, for instance that the end posts were all the same, just slightly higher than the rest. I would take a practiced eye to see the difference. 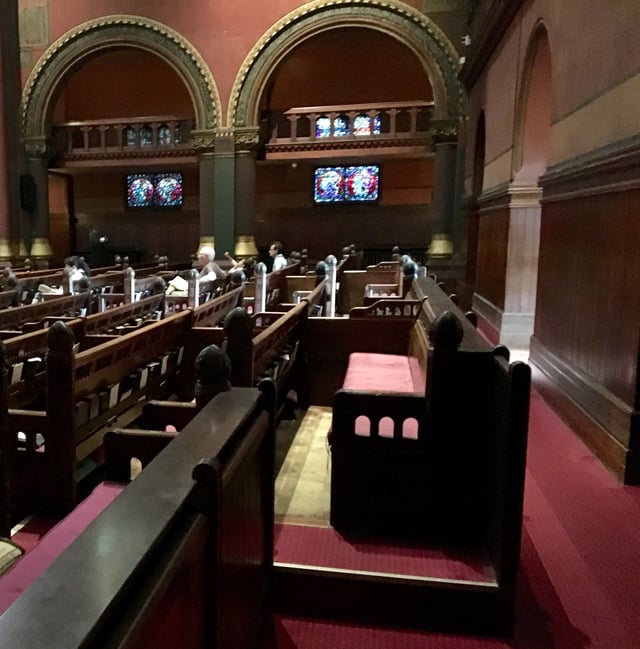 So I have one more reason to celebrate Richardson’s brilliance! This detail is clearly deliberate and wonderfully well planned. And the effect is to make anyone at the back feel special, just a bit elevated. I can only assume the idea came through the architect’s deep feelings for his Christian faith. In this one gesture he illustrates what it means to celebrate the least among us. For those who would sit in sinners’ row, Richardson offers them some of the best seats in the house.