I’ve written about church buildings taking on new uses after congregations move away or disband. Another fate for old an old church building is to become a place of worship for an entirely new congregation.   The Holy Temple Church of Our Lord Jesus Christ of the Apostolic Faith in Belton worships in just this kind of building.  The structure appears to have been built fairly recently. But it has two cornerstones that reveal interesting information about its lineage.

The second cornerstone is the more intriguing. The carving and lettering are typical of the late 19th century. The symbol of the Odd Fellows, three interlocking links with the letters FLT (Friendship, Love, Truth) is prominent.   The history of pastors who served Magnolia Baptist does include a Rev. Littleton, so it is easy to presume that First Baptist later developed into the Magnolia Baptist. And when the church built in the 1980’s it presumably took the old cornerstone with it. 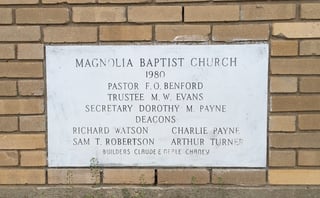 Both the Magnolia Baptist and the Holy Temple Church are African American congregations. A quick look through the history of the Independent Order of Odd Fellows indicates that it was not a multi-cultural organization. According to Wikipedia, it removed its whites only clause from its constitution in 1971. And it is unclear if there is any relationship to the current First Baptist. That congregation is well established and has a major facility on Main Street in downtown Belton.

So this building and its two cornerstones point to a significant history of movement and change. But they only offer hints. It may take significant digging to get the entire story.