I was intrigued this summer to learn of a 175,000 year-old site deep in a cave in France that shows evidence of building by Neanderthals. Once considered primitive pre-humans, recent discoveries show Neanderthals, extinct for 40,000 years, were relatively sophisticated contemporaries of early homo sapiens. Now there’s serious discourse about the possibility Neanderthals had religion. If they did, could that mean the earliest temples on earth actually pre-date the human species? 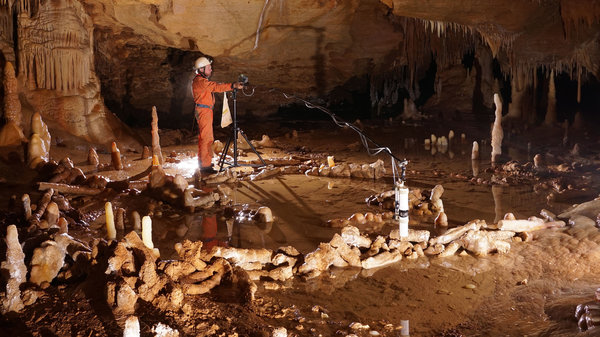 In an interview broadcast today on NPR, Michel Martin interviewed an expert on the Neanderthal, Barbara J. King, professor emerita of anthropology at William and Mary. She admits there can be no way to determine actual beliefs from the various burial sites and other tantalizing archeological artifacts. But she maintains that there is sufficient evidence of ritual and practices that indicate connection to a sacred world.

This site at  Gobekli Tepe in Turkey was constructed 11,000 years ago and may be the first human temple.

A significant study of a human archeological site at Gobekli Tepe in Turkey asserts that the structure there was built specifically for religious ritual. The author, Klaus Schmidt, has named this site the world’s first temple. That means temples have existed on earth for 11,000 years.

3-D reconstruction of the Neanderthal cave circles in France.

But the construction in France also has no other apparent use. The Neanderthal construction is a series of circles constructed of equal sized stone pieces. There apparently is no association with burial or with food preparation. We can only speculate, but the layout seems to suggest a representation of a cosmic ideal with a large circle. Smaller circles may represent stars, or family, or ancestors. More studies will inevitably expand our understanding of the Neanderthal, our pre-historic cousins. Questions about their religion should certainly include questions about whether they also built temples.