I have a deep appreciation for the International Airport Chaplaincy that supports and promotes ministries all over the globe. Their spaces, however, are frequently borrowed or repurposed rooms that often feel makeshift or leftover. Some airports do support these ministries and provide some innovate faith environments. So I was very interested in Atlanta’s Hartsfield Airport that actually has three chapels. One is outside, and two are inside the security perimeter. With limited time between connecting flights, I opted for the chapel in Concourse E. 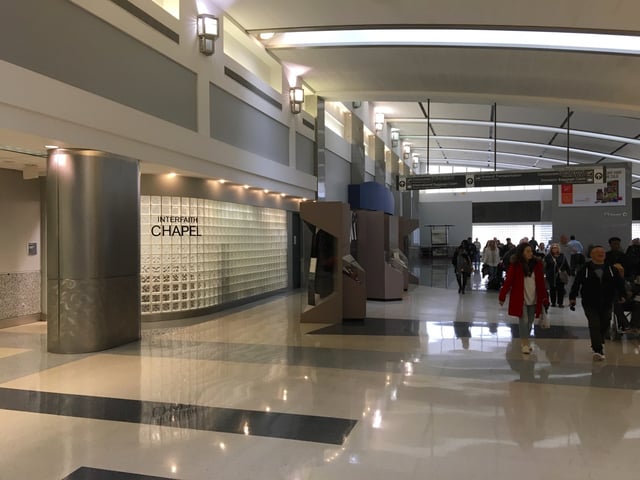 From the outside, the chapel was planned to be noticeable. At the top of the escalator stairs, a wall of backlit glass block feels a bit dated compared to other places in the airport, but it’s clear there’s a chapel here. I was disappointed with the otherwise fine installation celebrating the life of Martin Luther King Jr. The display cases, standing right alongside have little to do with the chapel. One would think there ought to be some connection.

The interior is even more puzzling. Bright lights along the glass block wall are glaring. They may provide a dramatic effect from the outside, but the lighting level inside doesn’t feel conducive to prayer. The effect of the lighting also diverts attention away from the end wall. Perhaps that was the desired effect. As an interfaith place of prayer, it is always a challenge to find images or symbols that relate to all faiths. Alternatively, some chapels use multiple symbols to acknowledge the major faith traditions. The end wall has an iconic image, the international symbol showing a kneeling person. While I know this is the sign for the Airport Chaplaincy, it seems very odd for this symbol to take the place of a cross, as though it was an object of veneration. 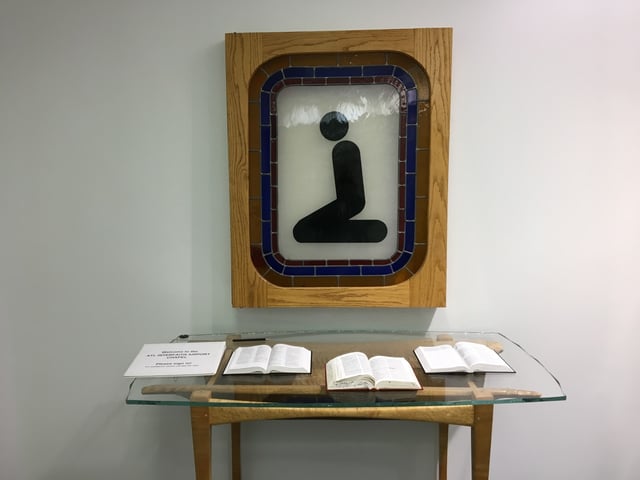 In nearly all interfaith chapels there also are accommodations to various religious rituals. A table may serve as an altar. A podium or reading stand may serve as a pulpit. A sign or symbol may point towards the East denoting the Qibla, or direction for prayer in the Muslim faith.

Stripped of all faith symbols, I thought this chapel should at least have some indication of compass points or a sign indicating the direction toward Mecca. Not finding any sign seemed so unlikely that I actually went back to look again in case I missed it. I finally looked down at the baseboard below the curved glass wall. Perhaps the designers overlooked this important detail, but the faithful have taken matters into their own hands. First in pencil, then later with red ink, people have provided a definite, if not immediately apparent mark pointing the way.

It is heartening to know there is serious support of the Airport Chaplaincy at Hartsfield Airport in Atlanta. It does seem that this support, and this chapel at least, are in need of an update.