There was early news this morning of a horrific event in Ethiopia. The New York Times reports at least 52 people were confirmed dead in a stampede that occurred at the annual religious festival of Irreecha. Very aware of last year’s tragic deaths in the holy city of Makkah during the annual Hajj, I was curious to find out about this festival and how it too became a deadly gathering.

From the NY Times reporton the deaths at the Irrecha thanksgiving festival.  Credit Tiksa Negeri/Reuters

Though Irreecha may have ancient spiritual roots, the current religious festival is neither ancient nor specifically catered to any one religion. The festival in its modern form is an increasingly massive gathering of the Oromo people around one of the glacial lakes in the region where the Oromo people have been documented at least since the 16th or 17th centuries. Gathering for thanksgiving and prayer a the end of the winter and rainy season is associated with the worship of Waaqa, the Oromo concept of God. But over decades of colonialism and suppression by various governments, most Oromo are practicing Christians or Muslims, with very few strictly maintaining the ancient beliefs. 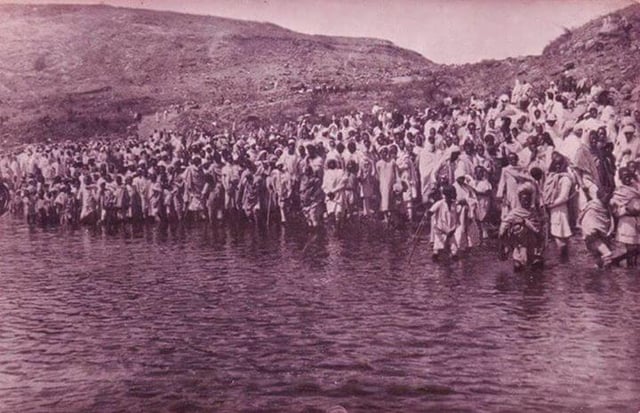 An Irreecha gathering in 1903 at Lake Hora Bishoftu.  Advocacy for Oromia website.

The resurgence of an Oromo identity and interest in reestablishing Irreecha dates to 1991 with a liberalizing of government policies towards ethnic groups. Since that time, Irreecha is centered around ritual and prayers, but it just as significantly reflects cultural and political aspirations for those who attend. Crowd estimates for today’s gathering were well over 1 million and potentially up to 2 million. Considering there are an estimated 38 million Oromo, that has major implications for the Ethiopian authorities. Reports suggest the military presence at the gathering was significant and included helicopters. 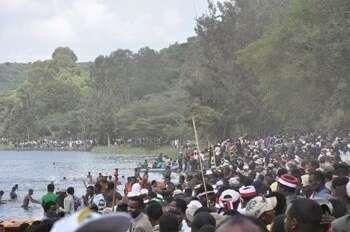 When attendees started to protest by chanting and raising crossed fists in the air, things apparently turned quickly. Police used tear gas to disperse he crowds. Some reported gun fire. As people began to run, they slid into open muddy ditches where many were suffocated and drown. Already the Oromo websites are labeling this the Irreecha Massacre, though it is unclear whether the loss of life was from overt government actions, or simply a tragic accident as authorities tried to regain control in the face of so many protestors.

Somewhere in all this conflict, it does seem the spiritual aspect may be able to help bring resolution. To prepare for the annual gathering, a theme for reflection is established and participants are encouraged to think and pray over its meaning for their own lives. The theme for the 2016 Irreecha gathering is: A Year of Sacrifice.