The New York Times has reported this summer on several actions against mosques by local zoning and permitting boards. There have been delays and denials for planned Islamic Centers in Pennsylvania and Virginia.  These actions were publicly justified for zoning and planning reasons. The Times suggests they were cases of discrimination targeted against the Muslim faith. 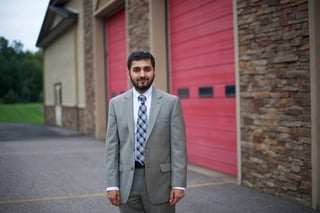 A leader of the Islamic Center in front of the fire station used temporarily by the congregation for worship.

I’ve previously discussed the challenges a churches or religious facilities frequently encounter during the development and permitting process. Churches fall under building and zoning codes designed for commercial properties. Standards aimed at developers aren’t always a good fit for a religious community and can impose impractical or sometimes impossible requirements. Religious groups planning major building projects should expect to spend extra time and effort navigating these potential hurdles. In most cases, a reasoned approach, and a reasonable argument can prevail.

The case in Pennsylvania, however, begins with a local zoning ordinance that especially disadvantages religious organizations. The town of Bensalem zoning map allows worship facilities only in one Industrial district.  Churches and temples were required to get use variances to develop beyond this limited area.  Up to this point, the town had granted these to other worship facilities and schools for properties outside the limited area. The mosque pleaded its case for 10 months to no avail. Their application was denied. In July, the U.S. Justice Department filed suit against the township. We hope this encourages local leaders to take a more generous approach to the local Muslim community as well as other religious organizations.