Some stories I’ve followed just keep getting better and more interesting. Another wonderful envelope arrived this morning from Boston historian, Lola Heiler-Stillman. She answered a question I posed about Boston’s Temple Bell in a blogpost about the World Peace Bell Movement. Previously, I had blogged about finding the enormous 450-pound Japanese temple bell during a stroll in the Fens this summer. The park is close to Boston’s Museum of Fine Arts, an institution with an impressive collection of Asian art. 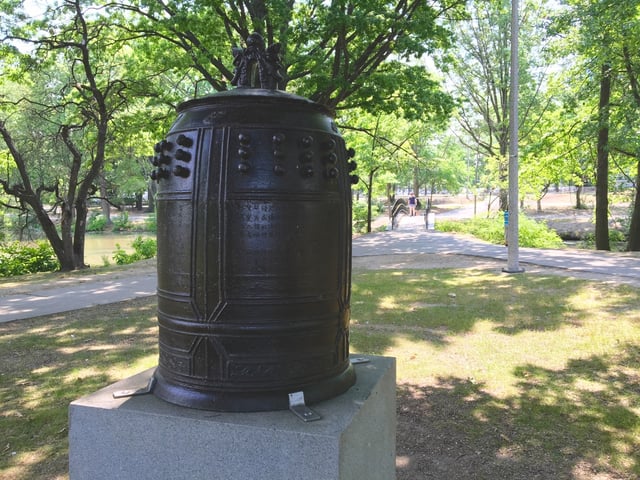 A bit of research revealed a fascinating story behind the ancient bell, rescued from destruction at the end of WWII by the crew of the USS Boston. These bells were melted down for munitions by the Japanese government during the war. This 17th century artifact is only a very few of its kind remaining in the world. 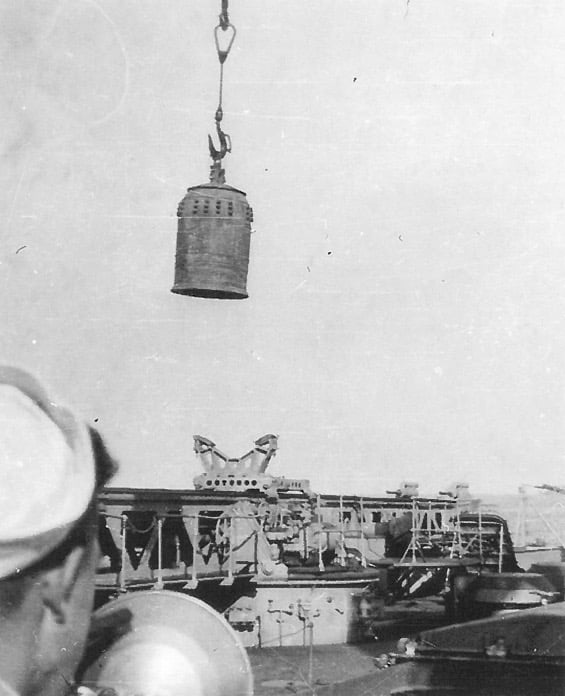 Bell being loaded onto the seaplane hanger of the USS Boston.  Image courtesy of Lola Heiler-Stillman

This bell’s story is truly remarkable. The number of times it has been rescued from destruction is mind-boggling! Ms. Heiler-Stillman included a clipping from the 1946 Boston Globe. It reports that Mayor Curley and Park Commissioner William F. Long accepted the bell from Captain Marion Kelly. He’s the one who extracted the bell from a pile destined for scrap metal in Japan. The bell’s first location in Boston was next to the Soldier’s Monument on the Boston Common. It replaced two German field pieces from WWI.

In the early 1950’s, the bell was due to be returned to its original site in the Manpukuji Temple but the people of the City of Sendai instead gifted the bell to the City of Boston as a gesture of peace and goodwill. From Ms. Heiler-Stillman’s letter, it appears the bell was tended to initially by Kojiro Tomita, curator of Asian Arts. But over time, the bell was forgotten. Someone, most likely in park maintenance, had painted over the bronze finish with black paint!

By the time the thieves knocked the bell off its pedestal in 2004, it probably wasn’t in very good shape. But when they rolled it down the streets of Boston, it certainly didn’t help matters. I can only imagine that the bell’s “voice” helped save it once again. It may not be part of Ms. Heiler-Stillman’s history, but I’m certain the racket raised by the heavy bronze on asphalt alerted the Boston Police. The thieves were caught and the damaged bell wound up in a storeroom waiting for its next rescue. 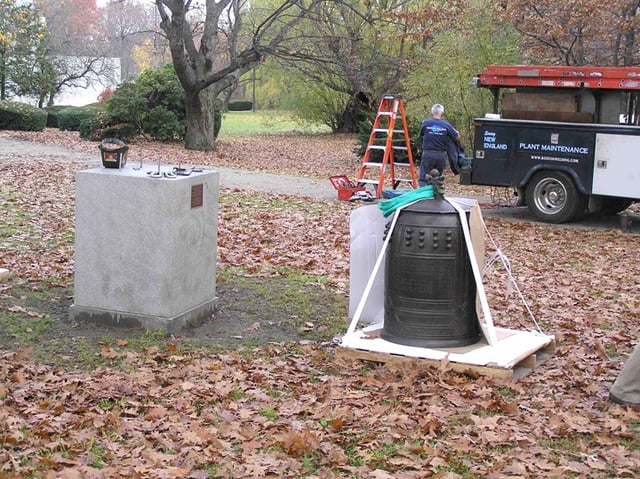 That came in 2011, when, once again, Kojiro Tomita, through the MFA, arranged for a second restoration of the bell. Photos of the installation at the current location are reproduced from Ms. Heiler-Stillman’s images.

The next logical chapter for the incredible story is pretty clear.  I'd like to add my voice to those who are calling for this bell to be given a proper and fitting pagoda (shoro) so it may suspended as it was originally intended. Apparently, the Fens was also the site of a stand of cherry trees donated by Japan years before. Restoration of those trees would create a fitting site for this bell, a remarkable ancient, and incredibly modern symbol of both peace and resilience!

The Japanese Temple Bell is located in the Back Bay Fens near the intersection of Fenway and Forsyth Way, Boston, Massachusetts