Walking through the Boston’s Back Bay Fens two weeks ago, I was taken by this unlikely public memorial, a 17th Century temple bell from Japan. The text on the plaque provided more questions than answers. If the bell were a gift from the Manpukuji Temple, then how were the sailors from the US Ship Boston involved? And what does it mean that it is a “Symbol of Friendship and a Bond of Peace?”

As it turns out, I’m not the first person to ask these questions. In 2011, a new docent at the Back Bay Fens Visitor Center, Lola Heiler-Stillman wanted to know how a rare Japanese Temple Bell made it to Boston. This was shortly after Japan had suffered from the devastating tsunami. Her research included hundreds of historic records and interviews with veterans who served in WWII. The story she uncovered was fascinating and provides important lessons about healing and reconciliation after cataclysmic conflict. 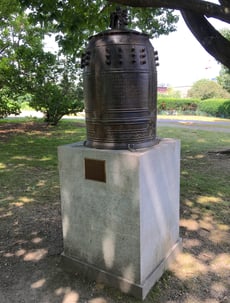 This 450-pound bell was forged in 1675 for the Buddhist temple in Sendai Japan. For centuries it was used for religious rituals. During World War II the Japanese government compelled citizens to donate metals of all kinds for artillery. Temple bells all over the country were included to such an extent that an estimated 95% of those bells were lost. When American troops took over they found a trove of 500 bells ready to be melted down. A number of these were taken back to the US, including this particular bell, which was collected by the captain of the USS Boston.

In the years after the war, the US State Department arranged for the return of all the historic temple bells. However, when they contacted Sendai, leaders in the city determined that the bell should stay in Boston as a special gift. And so the text on the plaque really makes sense. This bell, a religious and cultural legacy, remains in Boston as a gesture of friendship between the two cities. 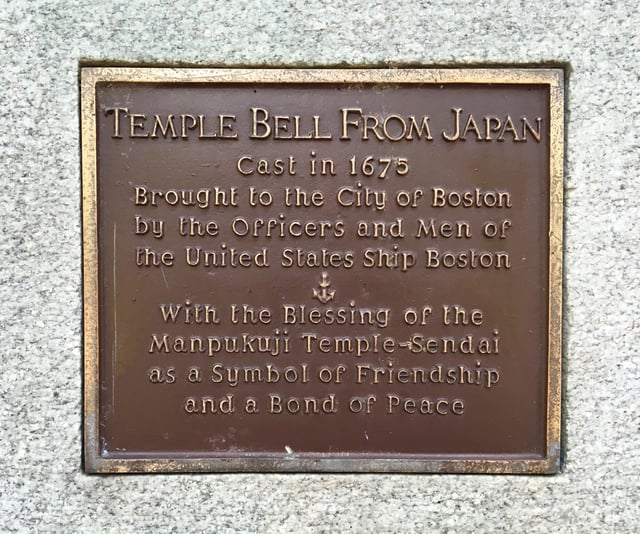 And were it not for a modern-day historian turned detective, the meaning behind this unusual artifact would continue to be forgotten.

This short film by Robert Yurukaze Dee captures the beauty and serenity of the Manpukuji Temple where the bell stood for hundreds of years. Watching it makes me appreciate even more the significant gesture behind Boston’s Japanese Temple Bell.

The Japanese Temple Bell is located in the Back Bay Fens near the intersection of Fenway and Forsyth Way, Boston, Massachusetts