Perhaps one of the most challenging church projects on record, renovations have begun to fix the crumbling chapel built directly over the site where Jesus was entombed. The structure, called the Edicule, stands inside the dome of the Church of the Holy Sepulchre; one of the most sacred sites in Jerusalem. Weather hasn’t caused the deterioration, rather, years and years of smoke, humidity and wear from millions of pilgrims has made this renovation necessary. 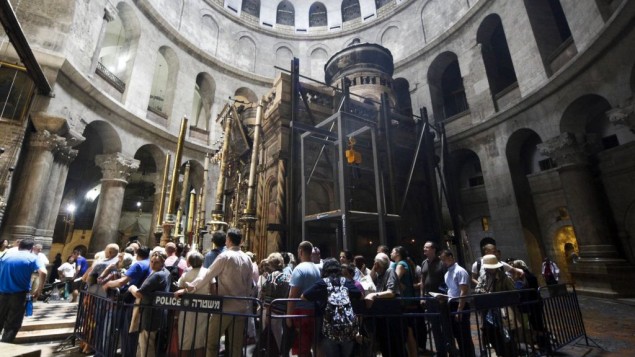 The Times of Israel's article described the scope of work.

Only its been clear something needed to be done since the 1940’s when British engineers reinforced the old walls with a cage of steel bracing. At the time, they thought this would be a temporary measure, but things don’t always go as planned in the Holy Land. The church is managed by seven faiths, including representatives of the Roman Catholic, Greek Orthodox, and Armenian Orthodox denominations. Their joint stewardship has been fraught with disagreements and acrimony over the years even with the 1853 “status quo,” decree made by the Ottoman sultan who stepped in to maintain the shared relationship amid historic squabbling. 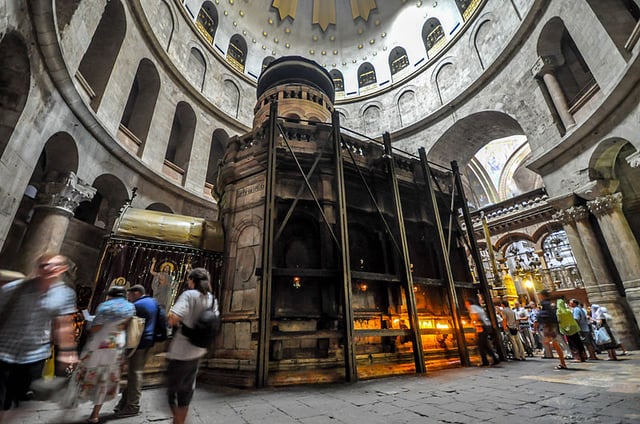 But sometimes a crisis forces groups to set differences aside. Israeli archeologists inspected the chapel structure, determined it was unsafe, and actually closed off access. With some help from the Pope and other church leaders, along with a major donation from the King of Jordan, the joint stewards finally agreed to have the restoration project initiated.

The crew from Greece is very aware of the enormity of their work. Though they bring stellar credentials restoring the Acropolis and Byzantine churches around the Mediterranean. The Washington Post quotes Antonia Moropoulou, a team leader from the National Technical University of Athens: “This is the most alive place we have every worked.” Since this is the tomb of Jesus, that is no exaggeration.