London Replica Goes Up In Flames

A few days ago, I blogged about the 350th anniversary of the Great London Fire. To commemorate this momentous event, Londoners worked up a series of activities they called, what else, London’s Burning. The the culminating act went off as planned as artists torched a massive replica of old London that they’d spent months constructing. 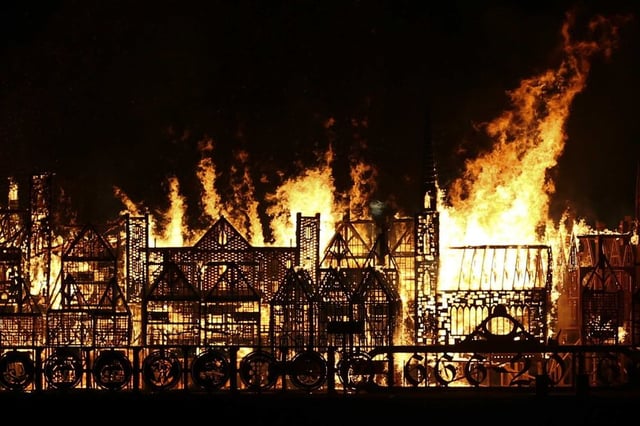 The whole idea seemed pretty morbid. But when I saw these images, I could see how the event bridged time to give modern observers at least a glimpse of the experience of watching the tragic fire. With fire hoses at the ready, the great burn now complete, we can also marvel at the resilience of those citizens 350 years ago.  This extended video from the Mirror also has a surprisingly good account of the art, the event, the history, and it's significance for modern London.

Of course, in 1666, in the immediate aftermath, the King was rightly fearing rebellion.  Londoners, however, got to work to rebuild, creating homes, businesses, and public buildings that became models of what at the time were considered modern design. And those designs were to soon have an impact on the new settlements about to spring up in the British Colonies, including those in America.  In a way, watching those flames from London's history is also connecting us here in the States with our own history.