It was September 2, on a hot night in medieval London, when a fire broke out in a bakery. Four days later, roughly four fifths of the city was in ruins. Though the number of reported fatalities was remarkably low, the fire claimed 87 churches, St. Paul’s Cathedral and approximately 13,000 homes. 70,000 to 80,000 Londoners rendered homeless began a massive rebuilding effort that changed their city forever. This year marks the 350th anniversary of the Great Fire, an event that continues to impact the City of London. 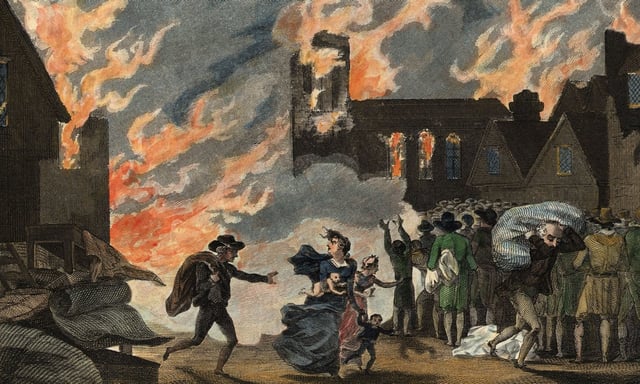 The Great Fire of London of 1666. Photograph: Hulton Archive/Getty Images

This calamity hit a population already recovering from tragedy. The Great Plague, the last major outbreak of bubonic plague broke out in 1665. By the spring of 1666 as most commerce and civic activities returned to normal, nearly a quarter of the population had succumbed to the pandemic. But old London was a tinderbox. The hot dry summer made the jumble of mostly wooden structures especially prone to combustion. So when London rebuilt, largely along the old street pattern, many new ideas of construction and urban design were embraced.

This week, the City of London culminates a series of celebrations and commemorative events in recognition of the 350th anniversary of the fire. The main event will be a fire that will burn down a massive diorama with wood framed representations of old London. The event will be streamed live on-line this Sunday, September 4. And the name for this series of events. What else, London’s Burning.

Update:  The replica was torched as planned.  See my blogpost Sunday for a wrap up!