Driving through East Austin this morning, we passed by Christo Rey, one of several Catholic parishes in the traditional Mexican American neighborhoods of Austin. Many families were arriving and joining a large Easter celebration gathered in front of the main entry doors. At the center of the crowd we noticed a bevy of brightly costumed dancers. The music included heavy drumming. The motions and wide gestures of the dancers reminded me of the dancing I’d seen at pow wows and similar Native American gatherings. 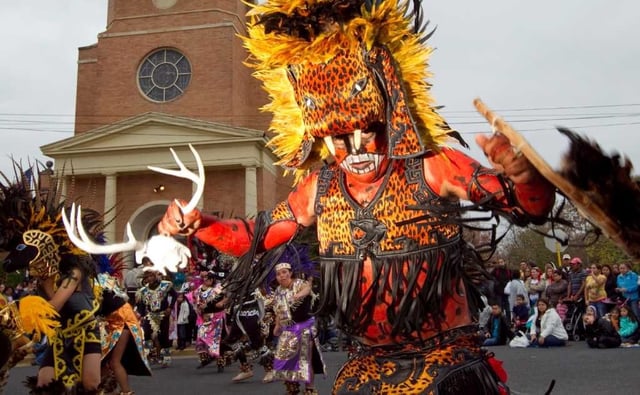 These performers were Matachines or Aztec dancers whose dance rituals come from old Mexico. The dances reference mythical characters and stories associated with the conversion of native peoples to Christianity. I knew little about these dancers and their traditions, but I did recall a brief mention of the Matachines by an anglo priest many years ago. He was explaining his reluctance to accept liturgical dance, however, under the right circumstances he thought it was ok. But, he said, that didn’t include the Matachines since he thought they were celebrating pagan traditions. Fortunately, attitudes change and many in the church have come to appreciate the wide diversity of traditions that carry significant spiritual and cultural meaning for many people. 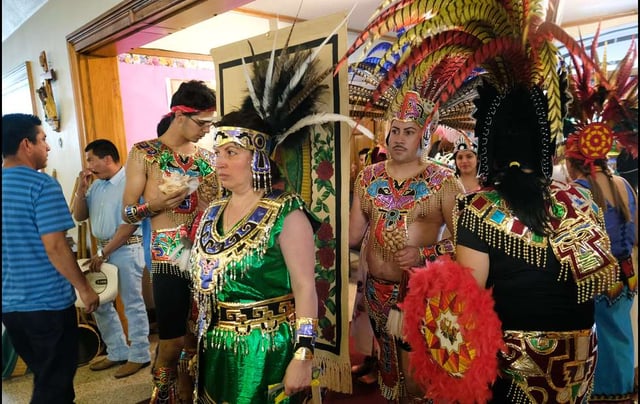 An article by the Texas State Historical Association offers a wonderful overview of the los matachines tradition. It explains how the dance is usually performed in celebration of a major feast or liturgical event (such as Easter, or the Feast of Our Lady of Guadalupe) and describes the main characters acted out in the dance. “Typically, the story revolves around a young virgin, Malinche, who tries in vain to get someone to slay the bull (El Toro). El Toro, representing paganism, is eventually slain by El Monarca, who symbolizes the acceptance of Christianity. Supporting characters such as El Abuelo and La Vieja (the Old Woman) provide comic relief.” 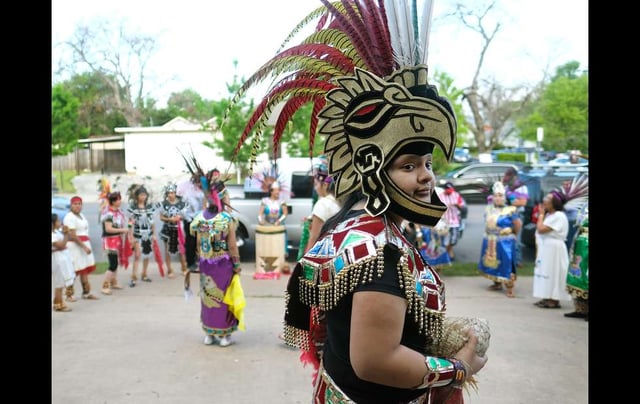 We were witnessing a tradition that dates from the 1600’s and the early days of the Spanish arrival. And with the large number of young children and families in the crowd, I’d say this tradition will likely continue for generations to come.

I’m sorry I didn’t get a photograph, but the image above is from a similar celebration at Our Lady of Guadalupe Church from the San Antonio Express News website.

UPDATE:  The Austin American Statesman's on-line edition has a series of Easter photos from various service, and the Cristo Rey event is among them.  I've added several images to the post and note the dancers we saw were from Danza Azteca de Cristo Rey.  Their facebook page includes pictures and videos from yesterday's event.