Black’s Memorial Missionary Baptist Church stands on a corner lot on a modest residential street in the St. John’s neighborhood in North East Austin. Noting the shape of the front facade and the stone exterior, it is easy to speculate about what may have been a progression of vernacular upgrades. This African American church ministering to working families may not have used established church builders or architects. But, over time, the congregation appears to have been influenced by other church designs as it made changes to the building and changed its image. 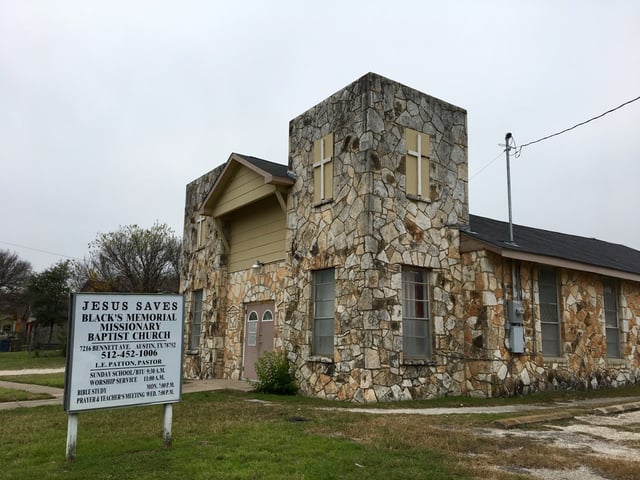 Imagining the possible progression from one stage to the next, I immediately thought of a number of older East Austin churches that may have influenced the congregation in planning their upgrades. I’ve blogged about many of them and include links as I describe the comparisons.

Looking at the roof and framing, the first church was most likely a modest wood structure.   The foundation appears to be a slab on grade indicating the building probably dates at the earliest from the late 1950’s or early1960’s. But that first wooden structure probably looked a lot like an older East Austin church, the Springdale Church of God in Christ. 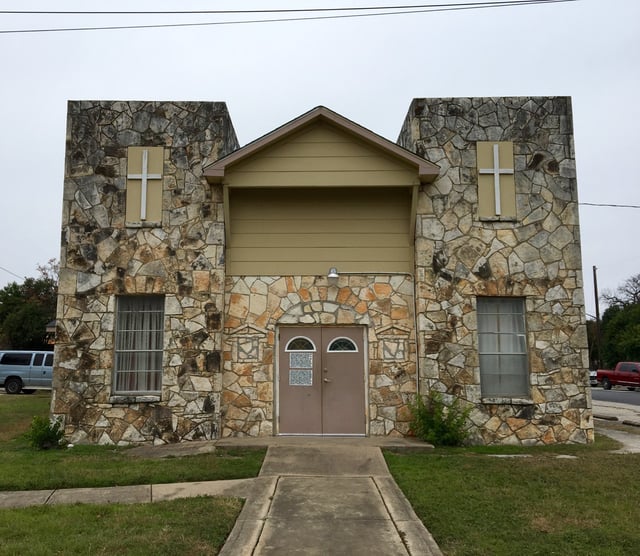 At some point early in the church’s life, the towers may have been added. Though it is possible the towers were built with the original church, their placement and the separate structure of the link between them points to a later addition. Once the towers were completed, the look of the church would have resembled Mount Carmel Missionary Baptist Church.

With the next upgrade, the church changed its look by putting stone siding over the wood exterior. Many modest churches, and many in East Austin, used masonry cladding to cover older wood siding. I must note at this point that I was not able to go inside to look more closely at the construction, so this really is speculation. 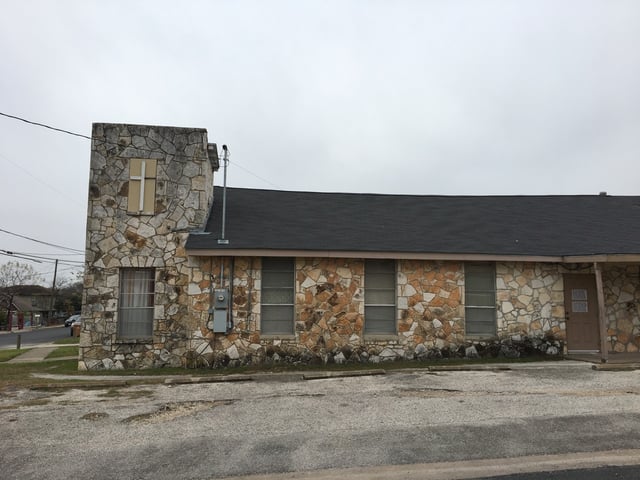 It is possible that the first phase was constructed entirely of masonry, in which case, the first phase with a simple pitched roof may have been stone after all. But if the church was originally built with stone siding, there’s enough difference in the tower stone to suggest it is a later addition. The congregation may have been inspired by other traditional churches such as the Wesley UMC on East 7th Street.

I would love to know whether the towers actually functioned as bell towers, and whether the bells are still inside. The towers most likely had screens or louvers to cover the openings. But over time, an open belfry requires maintenance. Like many other churches, the Black’s Memorial congregation seems to have put in a solid panel to seal them up.