Some of the largest kitchens in the world are operated by Temples in India. The National Geographic Channel India created a series profiling mega kitchens. Several of these are in Temples, including the Dharmathala Manjunath Templewhich serves up to 100,000 devotees in one day on at the height of religious festival days. Incredibly, the entire enterprise is centered on the idea that each meal is healthy and nutritious and is integral to the experience of attending a worship ceremony at the Temple

With an organization that would make fast food corporations envious, the Dharmathala dining facility is able to sit, serve, and clean up after each service in 13 minutes. Devotees wait in line for less than 15 minutes for their food. The wastes are organic and all of these are reclaimed and composted. This operation has been going on for many generations, though the current administrators have introduced many innovations even as they uphold an ancient tradition, that of spiritual food. 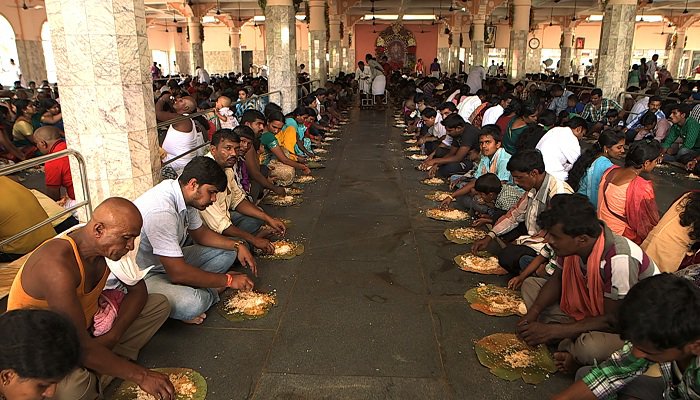 The simple concept is that the food itself is spiritual. In Hindu tradition, the food is prepared and first served to the gods. Once the deity accepts the offering, then the food may be distributed and consumed as a sacred blessing. It is interesting that the Dharmathala Temple is actually administered by a family of Jains. The sacred devotion of food may also be part of that religious tradition, but I don’t know for sure.

The Dharmathala organization is among several Indian temples, including the Sihk’s Golden Temple, that make this happen on a massive scale. And one of the most important aspects of these spiritual devotions is that all who come are fed, and all are fed for free.

The Annapoorna Dining Hall is part of the Temple in Dharmathala, Southern India