Memorial for an Architect - the Father of the River Walk

I don’t know of many monuments honoring an architect but San Antonio’s memorial for its native son, Robert H. H. Hugman, is an obvious choice. It is widely known that it was Hugman who conceived of the downtown River Walk. But I just learned about his herculean effort over a number of years to actually get the project built. Along the way were many rejections and active adversaries pushing to sideline both the man and his vision. But Hugman made the realization of the River Walk his personal mission, Without him, the old, flood prone river would be gone, and his vision of it’s potential as an urban asset would be long forgotten. 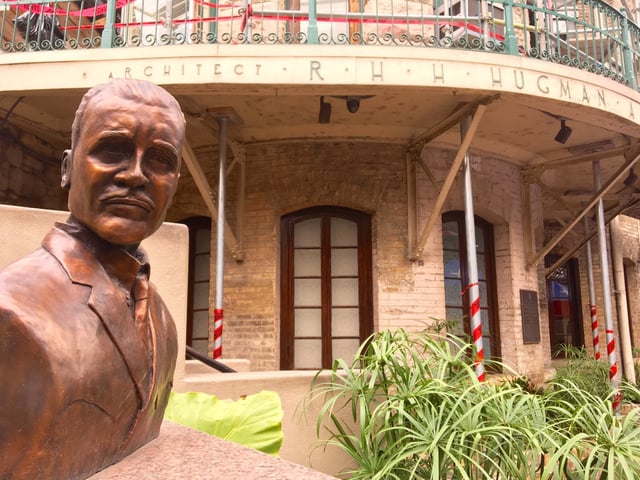 The River Walk we know today is an international attraction for tourists and residents alike. Descending the picturesque steps a visitor finds a magical place where the city above all but disappears. The meandering paths lead past shops and restaurants, or places to rest and simply soak in the peaceful view. Hugman came up with this vision upon returning home from his post-graduate employment in New Orleans where he was strongly influenced by that city’s historic preservation.

In 1928, the San Antonio proposed to address downtown flooding by draining, filling and cementing over the river. With the help of the Conservation Society, Hugman reached out to City leaders and successfully pitched his alternate vision, with descriptions of old cities of Spain. "The Shops of Aragon and Romula,” were to be set in “a sunken garden of loveliness.” But the plans wouldn’t begin until the next decade when the Works Progress Administration provided initial funding. Local fundraising finally got construction started, though Hugman, who had been commissioned as the architect, was fired before the project was completed.

Eventually, Hugman placed his own office in one of the prime River Walk spaces, but for many years, use of the amenity languished. It wasn’t until the 1960’s when the City began improvements for Hemisphare ’68 that the River Walk was able to reach its potential. Subsequent expansions and extensions have made the River Walk an global destination. Hugman, before he died in 1980, was celebrated for his role as the “Father of the River Walk.” In 2015, a bronze bust and dedication plaque were added near the front of Hugman’s old office. The artist, Sean Klinksiek, just happens to have a great uncle who worked as a stone mason constructing the original River Walk.

The Robert H. H. Hugman bust and memorial is located on the River Walk below E. Commerce Street near the Losoya Street intersection.