It’s easy to forget that long before the Texas oil boom, long before Texas was an independent country, long before Moses Austin and his son, Stephen F. Austin brought 300 families to the Texas territory, there was more than a century of European settlement in Texas. Those early settlements were organized around the church.

In San Antonio, seven of the original missions remain. The oldest of these, Mission San Francisco de la Espada, was the first mission in Texas, started in East Texas in 1690. After several relocations, the friars chose a site on the San Antonio River and began construction of a friary and then a modest chapel. Completed in the 1756 the stone building was intended to serve the mission community until a larger church could be built. The new church was constructed nearby, but soon proved to be structurally unsound and by the 1770’s was torn down. The mission struggled for many years but a fire in 1826 destroyed much of what remained. Though the chapel survived, after the fire the site fell into disrepair. 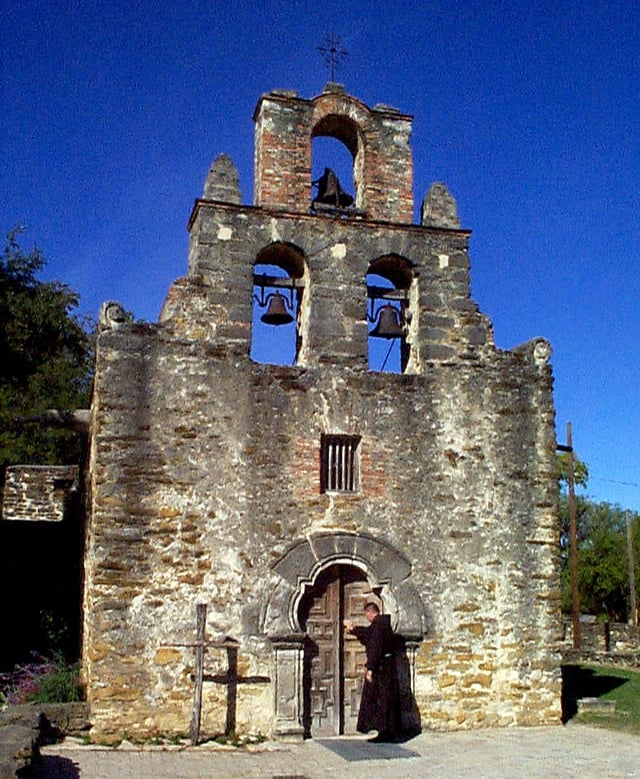 Most of what exists today was rebuilt starting in 1855. Father Bouchu is credited for his determination to rebuild a place of worship. The front façade was the only significant portion of the buildings that remained. It is interesting to note that the aqueduct that was constructed in the 1730’s remained in use to serve the surrounding farm and ranch lands. The stone aqueduct is now the oldest one to operate continuously in the United States.

The National Parks Service operates Mission San Francisco de la Espada as one of four properties of the San Antonio Missions Park. The Catholic Diocese facilitates regular worship in the chapel in conjunction with the nearby congregation of Santa Frances Cabrini. The Old Spanish Missions Director Father David Garcia, spearheaded a capital campaign raising 15.5 million to help restore the four missions. In 2015, a complete restoration of the Espada chapel was celebrated with a rededication mass offered by Archbiship Gustavo García-Siller.