While Boston waits for a permanent memorial for the marathon bombing victims, the Massachusetts Institute of Technology last year dedicated a notable structure in honor of Sean Collier, the campus police officer slain by the perpetrators. The site of the shooting had already become a focal point for grieving members of the student body, faculty, and administrators. Campus police are rarely killed in the line of duty, the expectations for the job are be more to offer assistance than to keep law and order.

The Boston Globe ran a feature on the one-year anniversary of the bombing noting that the memory of Officer Collier, only 26 at the time of his death, was being strongly embraced by the MIT community. The shockwaves felt in all areas of the campus were still very present. From the hand made marker at the spot of the shooting, to the professor who every month delivered fresh baked cookies to the police, MIT was living the motto heard frequently on campus, “Collier Strong.” The Globe story noted that plans were already underway to create an appropriately MIT permanent memorial. 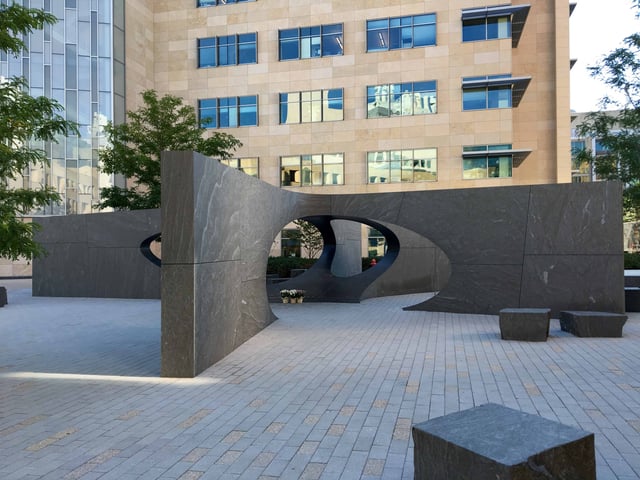 The head of the architecture department, J. Meejin Yoon, teamed up with structural engineering professor, John Ochsendorf in the design consisting of over 190 tons of polished granite. Professor Ochsendorf also happens to be an expert on ancient stone structures so the idea of hoisting 32 massive blocks in place didn’t seem so far fetched. But unlike the ancient Romans, the MIT engineers had the latest computational analysis to assist in evaluating the very contemporary form. 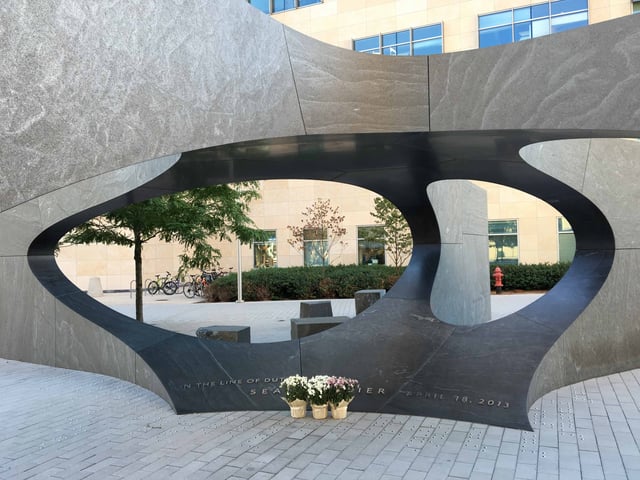 The memorial was dedicated in 2015. The five grey granite walls come together to form a hollowed out curved shape in the center. The walls connect at the top, with a five-sided keystone forming the ceiling above the central space. The lower section of the walls merge and join in a variety of curved shapes. The effect is to make a space that is both light and airy as well as solid and somber. The shape and the relationship of the memorial to the surrounding area changes as visitors walk around or through the space. 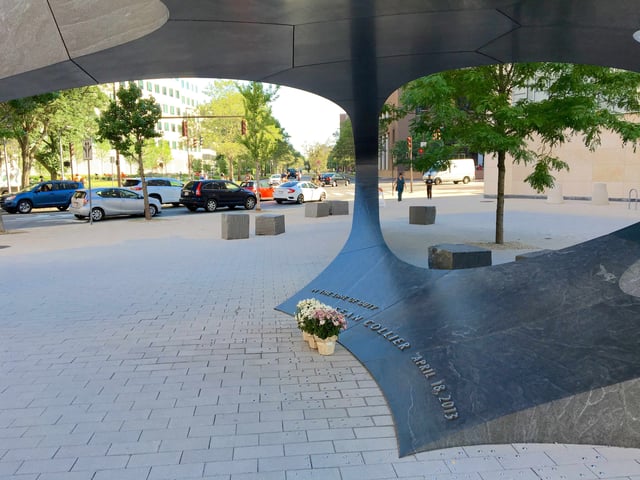 The effect is both very contemporary and still recognizably traditional. The use of the keystone in the center is a classic device for creating large arched openings. The grey granite is traditional, selected specifically from Virginia quarries. Yet sophisticated technology was required to precisely cut the unique shapes. Even the construction required both traditional and high-tech procedures. Stone masons expertly assembled the massive blocks starting in the center and working outwards to the ends of the five walls. But the support scaffolding was only removed very gradually, lowered millimeters at a time to ensure the tons of granite actually stayed in place. 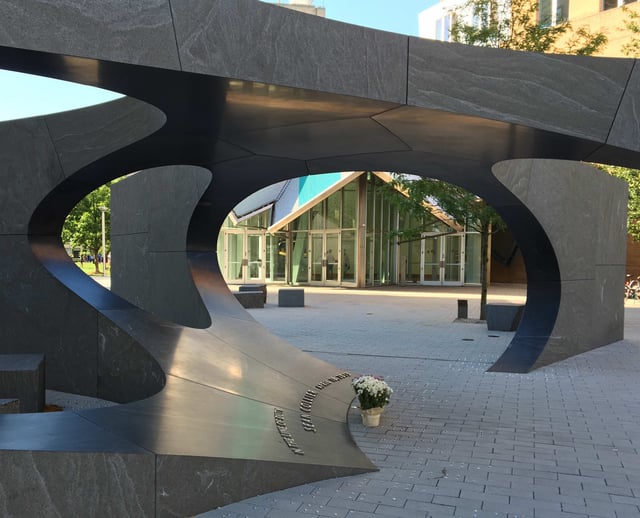 I noted an additional, perhaps unintended reference to tradition in the overall shape. From above, the architect suggests the five walls are like the fingers of an open hand. Though that can be discerned, another striking form is apparent from above. Four of the main walls create the primary intersection, the fifth frames an additional opening in line up with the main door of the adjacent Stata Center for Computer Sciences. Without the fifth wall, the memorial forms the distinctive shape of a Christian cross. 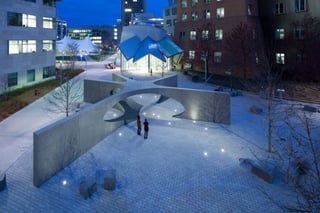