Several decades ago, a small village in Northern Spain fought hard to save its old church. An airport was due to be built over old stone walls dating from as early as the 16th century. The campaign was successful, the runway was rerouted, and the Church de San Miquel Arcangel was saved. More recently, the village leaders realized they needed to find expanded uses for their landmark structure. While worship services would continue, the intention was to bring in new activities as a community and arts center. They reached out to established artist and former Franciscan monk, Xabier Egaña. The artist was inspired to develop a colorful vision of contemporary and traditional symbolism to cover the interior walls. 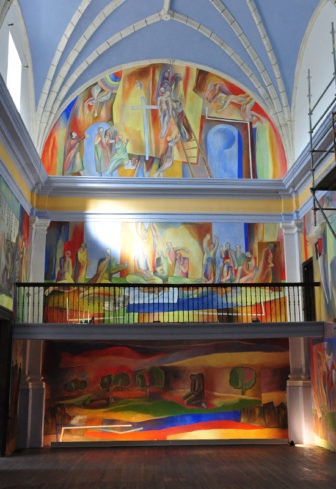 Egaña developed a concept that has transformed the church interior into an immersive mural with over 150 vignettes. Recognizable religious imagery include stylized depictions of Adam and Eve and Jesus with the Apostles at the Last Supper. These are juxtaposed with images meaningful to contemporary culture and local Basque heritage. Visitors will find references to novelist Günter Grass’ political novel, “The Tin Drum,” and Edvard Munch’s painting, “The Scream.” There are references to five labor organizers who were killed in church during the regime of Francisco Franco. 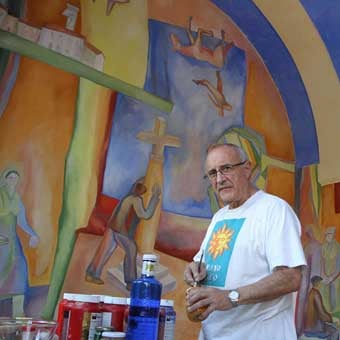 Egaña’s career was closely tied to other Basque Neo-Expressionists at the vanguard of modernist religious art and architecture at the later part of the 20th century. Coming out of semi-retirement for this project, the artist agreed to donate his time. Starting in 2011, and working seasonally, the church is slowly being transformed into a vibrant cultural as well as spiritual place of renewal. According to a great report by Religious New Service, the artist, now 73, hopes to complete his work by next summer.

Iglesia de San Miquel Arcangel is at the center of Antezana de Foronda, a village in the municipality of Vitoria-Gasteiz in the province of Álava, Basque Country, Spain