The husband of a distant cousin dropped by Austin today. He and his wife have been active with the Catholic Diocese in Graz, Austria and he introduced me to a remarkable congregation in his home town. For the past two decades St. Andrä has embraced and sponsored modern art. The local priest, Fr. Hermann Gletter, beginning in 1999, promoted the idea of introducing contemporary art into the church’s traditional worship space as well as the liturgy. This was part of an outreach program to make the church more relevant to a growing diversity of cultures and faiths in the surrounding community. 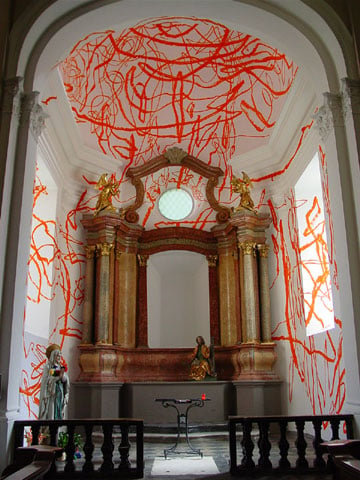 Between my relative’s explanation and the choppy Google translation of the church’s website, I’ve got a pretty good idea of the program. The concept may seem bold but the church promotes this as the same kind of cultural update that took place in the period from 1735 to 1770. It was then that the original church was transformed by the best artists of the day who contributed ornamental furnishings to create a Baroque interior including several altars and grand high altar. In 1882 a renovation program added to the interior by a recognized local sculptor who brought in new figures and added bright coloring to the older altars. The main façade of the church was also updated to reflect late 19th Century architectural tastes. 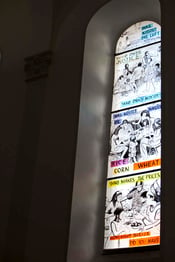 So the idea of transformational art wasn’t a new concept, but the media and forms certainly were. Using super-graphics, large words were painted in bright colors on the outside of the church, as if to say there’s something inside worth checking out. The fine old Baroque altar pieces remain, but the artists involved have been encouraged to have a frank dialogue with the past. The list of commissioned artists who have contributed to the church is impressive. Some works have been modest, changing details or adding pieces to encourage contemplation. Others have been aggressive, including a free form red squiggle all over the walls surrounding one of the traditional altars. The windows have become creative opportunities since the old stained glass was destroyed by nearby bombing in WWII. 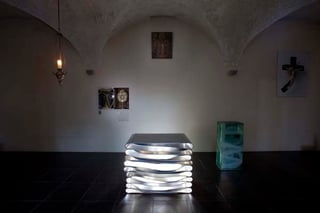 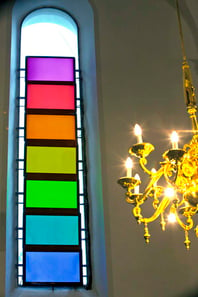 Liturgical symbols and elements have also been a major focus. A new altar and pulpit were commissioned for the crypt chapel. The church has been willing to experiment with the ritual elements as well. A collaboration for Holy Week tried another way to drape the figures behind the altar. A dazzling light beaming from the reredos does the same thing, but also adds a powerful metaphor of the eternal light of God. Not all the ideas or works have been comfortable or even successful. The large projections on a screen over the altar during one Holy Week celebration sparked a huge outcry from traditionalist. I’m not sure the 3-D skull was so terrible. The projection of a naked man and woman standing back to back with arms outstretched as though on a cross, well, I’ll bet that got folks to really stop and take notice!

This video from the artistshows the dazzling light emenating from the altar on Good Friday.