As I’ve documented this past year, there are many connections to spirituality and religious traditions in modern culture. So it was no surprise to find a rich array of such references these past two weekends of the East Austin Studio Tour. Now in its 15th year, this tour’s offerings demonstrated an increasing level of sophistication and maturity in the Austin arts community.  As with my reporting on the Due East previewparty last week, the examples here do not represent a summary or overview of the tour or the artists’ references to spiritual themes. I truly believe that would be impossible. Like many East visitors, my wife and I had to be selective, with so much available we could only see a small percentage of the many venues. These are just some of the works that particularly caught my eye. 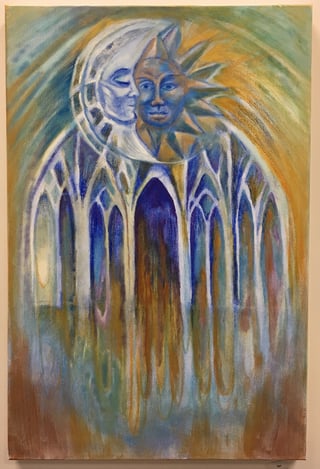 Two artists at the Cement Loop, a gallery at the end of an aging shopping center at 5811 Berkman Drive, had very different ways to represent the influences of the spiritual. Anastacia Grebnova notes her purpose is to express unity and healing in her art. She notes the strong influence of Carl Jung’s concept of collective unconscious as her paintings contain archetypal images and figures. The painting here renders a classic anthropomorphized sun and moon over the tracery of a gothic window. 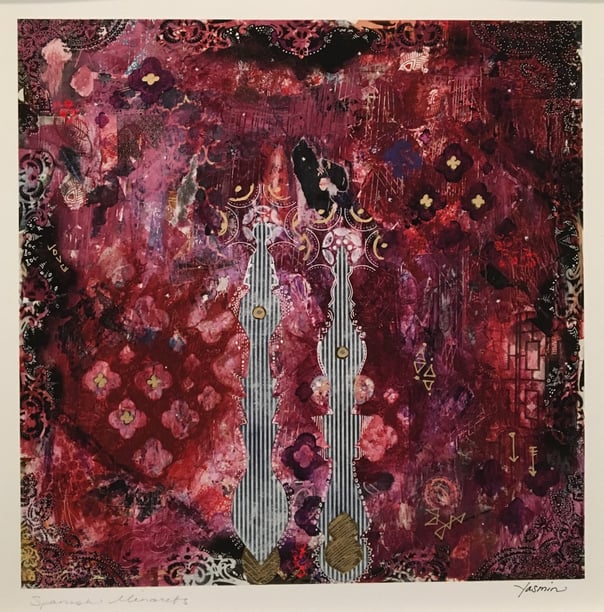 Around the corner, Yasmin Yousef has a series of collage pieces with materials and imagery from many travels and her family ties to Egypt. This collage is one of a collection with various place references. In this composition, the inspiration came from the minarets, a tower associated with mosques, that she saw traveling in Spain. 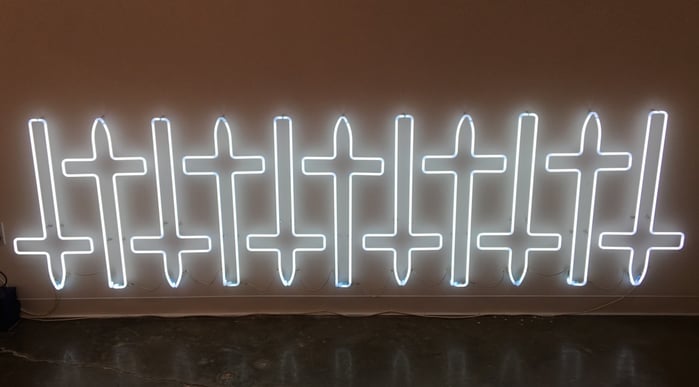 Artist Bale Creek Allen has his own gallery at the Canopy, 916 Springdale Road. His work is in a variety of media, but his neon piece was plugged in and hard to overlook. The name, “Crucifence” reflects a humorous take on the ubiquitous religious symbol. 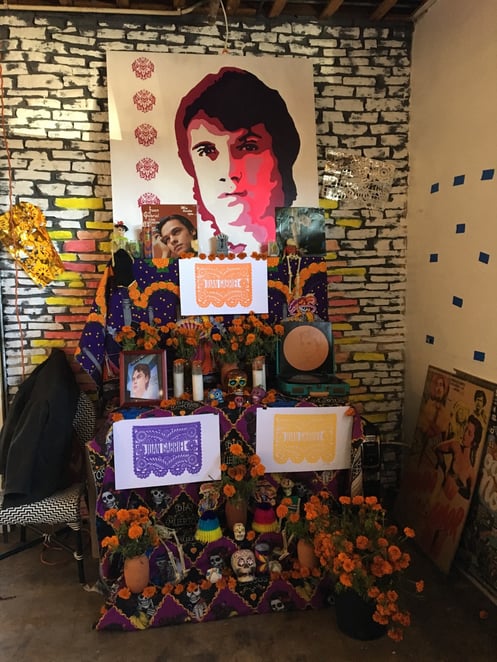 A temporary installation at 2209 Manor Road by artist Federico Archuleta included this altar, or ofrenda for the popular Mexican singer, Juan Gabriel. Gabriel died several months ago of a heart attack at the age of 66. The work is among several to be included in the happening featuring street artists from El Paso. I spoke with Archuleta about the event taking place this evening, but forgot to ask if the Juan Gabriel ofrenda was his composition, or if it was created by one of his colleagues whose art was also on display.