Looking over the map of the Clear Lake park dedicated to the memory of the Challenger Seven crew, one landmark drew my attention instantly. “Mother Earth Eco-Sculpture” was just a note on the list of other typical park locations. I knew immediately I would have to check out the place.

Mother Earth is actually a very large earth mound placed in a clearing of trees along the main walking trail. At first glance, the low hill has the size and proportion of a skate park or mountain bike obstacle. Green pipe rails encircle the mound and signs warn bikes to stay off, but still it would be easy to walk right by and never notice this was a piece of artwork. Fortunately a well-placed plaque gives a pretty thorough explanation. It takes some imagination to see the earth mound as a human figure, but recognizable elements are all proportionally in place.

This art piece was commissioned by Houston Women’s Caucus for Art. Local artist Carol Rensink placed 60 truckloads of clay to sculpt a massive 80-foot figure of a woman lying in repose and covered in low-maintenance buffalo grass. The work invites exploration. A worn path leads up the figure’s shoulder and continues over the top of what appears to be a large midsection. An on-line note about the Eco-Sculpture explains that the figure is formed in the shape of a pregnant woman, so the highest point on top of Mother Earth is also over her in utero baby. The note also explains that the figure was only given one breast, the other missing, as though removed due to cancer. The intention of the artist was to symbolize women’s health issues as well as the environment. 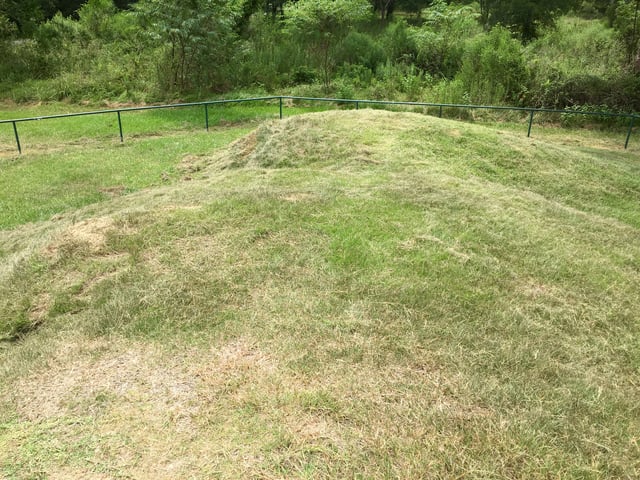 View of Mother Earth's Head from the torso.

I was frustrated in my attempt to date the sculpture. On-line information is scant, though the list of HWCA archive materials makes me think this was completed in the dark days before everything was on the internet - at least fifteen or twenty years ago. The artist may have intended the earth mound to eventually weather, but the shape is showing some serious erosion. I would encourage an update or rebuilding of the shape, perhaps at decade intervals to keep the forms recognizable.