My Islesford View Inside and From the Tower

Today, thanks to Joy Sprague and Henry Grandgent, I was able to spend time studying the inside of the Islesford Congregational Church. And best of all, I got to climb up in the bell tower!

Yesterday’s post was all about this building’s history. Neither Joy or Henry knew who the original architect was, but Henry recalled the church was constructed by a prominent builder of that era who is till known for many fine homes in the vicinity of Mount Desert Island. I don’t recall the name, but he certainly was familiar with Shingle Style architecture.

Buildings in the Shingle Style emphasized local materials, especially wood, with patterns and details that celebrated the abilities of local craftsmen. Shingle Style architecture eventually evolved into what we now call Arts and Crafts and has historically been considered one of the precursors of modern design.

Studying the interior of the Islesford church, it is fascinating to realize the care and effort involved in constructing a large open space of this kind. Of course, in most buildings, the inside walls and ceilings cover up the framing, but here, the care and workmanship of the builders is on full display. For a late 1800’s building, very few details are aesthetic embellishments. Though very beautiful, just about every piece of this structure, is there for a reason. 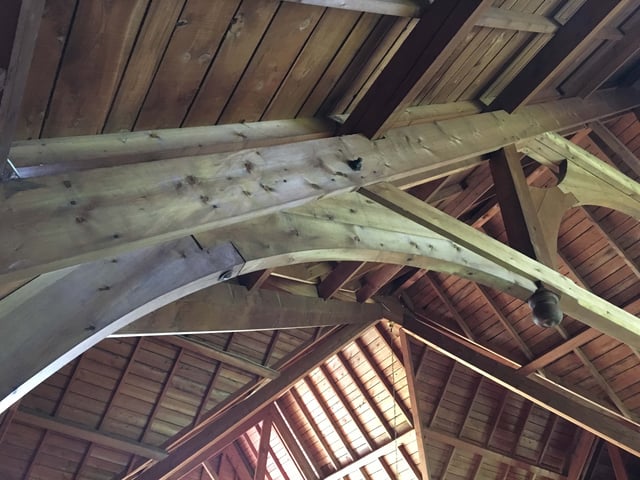 A few specific examples are worth noting: The large exposed trusses have curved boards that attach at the base connection between the wall and the truss. These are bolted on tightly to the columns below and sandwiched between the two large boards that make up the upper chord of the truss. This extra mass makes a beautiful curved form at the corner of the truss, but it also is serving as a lateral brace for the truss and column connection. 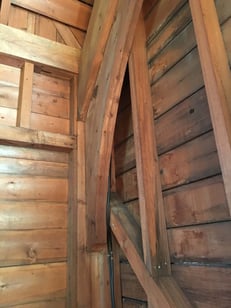 Another very subtle detail I noticed is that the studs, dimensional lumber probably milled from somewhere close by, are different widths. The exterior walls are framed with 2x4 lumber that appears to actually be 2 inches by 4 inches as would be expected for a building of this vintage. The two walls that adjoin interior spaces, however, are framed with 2x3 lumber. The walls are narrower since they aren’t as tall and don’t have to deal with the additional wind loads of the exterior walls.

By the time I joined Henry for a tour of the tower, I was looking for more crafted details. It didn’t take long to find them. The ladders were ingeniously put together to maximize the tight space in the tower. Though we stood on an a-frame ladder, we could have used the original wood extension ladder. It hung above the access hatch and was balanced with a counter weight. With come careful maneuvering this ladder can be pulled down to become a temporary stair. 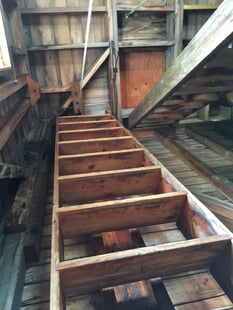 In the cupola, I noticed those curved braces again. These forms create arches that frame the belfry from a distance. Up close, it is clear that these solid pieces are once again serving to add lateral bracing. Henry noted that many of the smaller pieces had been replaced or repaired over the years, but the turned columns and the arched braces were still original.

One bonus of scaling an open bell tower like this one is to take in the view. Nearly the whole island is visible from above. So is the bell. It was manufactured in New York and has the dedication date inscribed - 1899. That means the church was completed possibly before the bell was forged. But maybe not.

An island history book notes the cornerstone being set in 1898. It may be the bell was ordered at the same time and delivered as the church opened sometime in 1899. Though we noticed that the framing of the main church was finished before the bell tower was put together. Henry speculated that the tower could have come later, but I suspect what we saw in the tower structure is simply the way it was constructed. I seems like another practical construction decision made by the builders - put up the main church structure first, and then erect the tower adjacent to it. 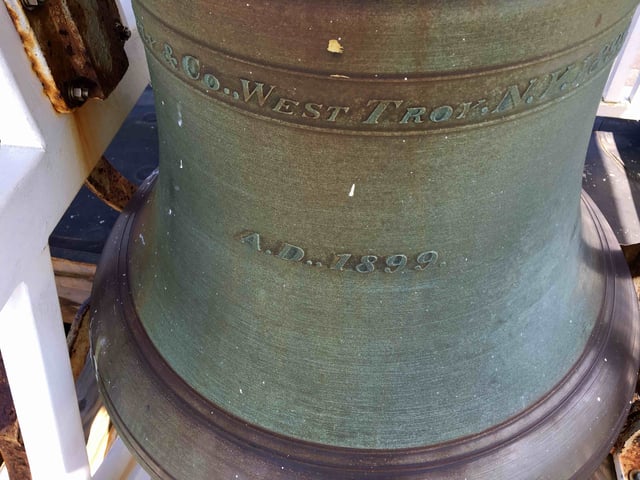