Wrapping up our meeting today with leaders at the Thai Buddhist Temple of Austin, the Bhikkhu, or monk who has been most involved with the design for the new temple made a simple request. His English consists of only a few words and my Thai is nonexistent. So he approached me with a picture and pointed to the roof.

“Oh, that’s a spire, or cupula, “ I said. He nodded and we both understood that one additional element should be added to our early design concept. I assured him with several nods that we would accommodate his request. The committee members who take care of the business of the Temple speak fluent English and often serve as translators for the monks when they wish to interact with the architecture team.

In this case, I had a request of them. “May I ask, what is the Thai term for the Temple spire?”

In a previous blog, I noted the research we’ve been doing to better understand the various components and details of a traditional Temple. The importance of roof ornamentation is very clear, with special names for each. For example, the finial at the top of a gable is called a chofa, while the ones at the bottom that extend the ornamented fascia are called hang hong. 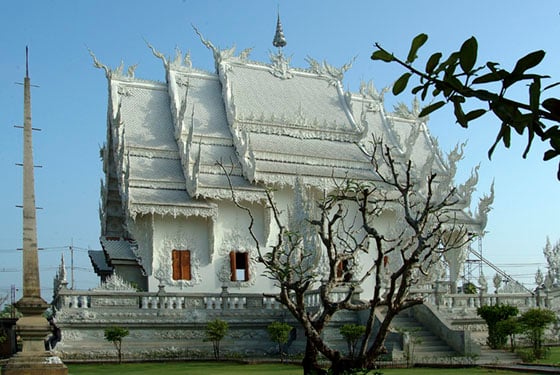 Spire in the center of the Silver and White Temple in Thailand. (Clark Lambert)

After several exchanges in Thai, the group finally came up with what seemed to be the closest name for the central spire. “Mondop,” said the Bhikkhu. There were several more discussions about how to pronounce and spell the term in English. I thanked the Bhikkhu and said I would do more research.

There are several great introductory resources for anyone interested in Thai traditional architecture and Thai Temples. One author, Tom Billinge hosts the website Temple Trail to introduce visitors to a range of worship sites with a focus on Asian countries. His Thai Temples 101 page gives a definition for the term Mondop that is at least somewhat related: “The mondop is normally a square building that contains a shrine or performs some other important ritual function such as a scripture repository or reliquary.”

We’re not designing a square building, and this will be the main worship hall, or Ubosot. So I don’t think we’ve quite gotten the right word. I’ll keep looking to see if there’s a better term for the spire at the center of the roof ridge. In the meantime, we’ll continue to study traditional Thai forms as we find creative ways to adapt them to Texas architecture.