A church with a storied history, there is much to write about the Nineteenth Street Baptist congregation and its facility in northwest Washington DC. My focus for this article is just on the transition in the mid 1970’s when the church moved to its current 16th Street address. The facility was the former home of the Jewish congregation, B’nai Israel. Touring the church more than 40 years later, the adaptation from one congregation to another worked extremely well and may serve as a great example for other groups considering such a transition. 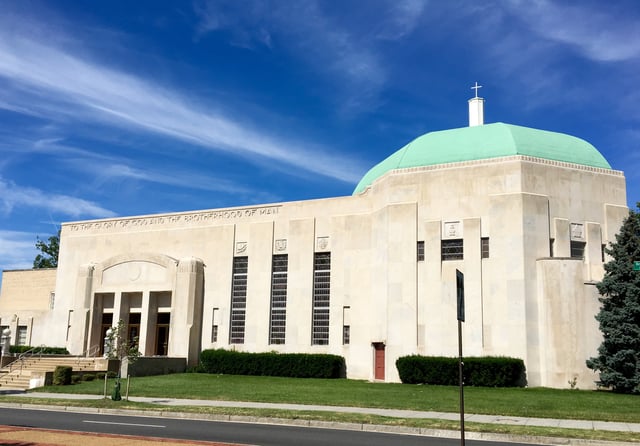 One important decision was to keep the church’s name. I’m sure there were lots of discussions about having the 19th Street church on 16th street, but with 135 years at it’s previous location, the name and identity were clearly more important than any slight confusion about the church’s new address. 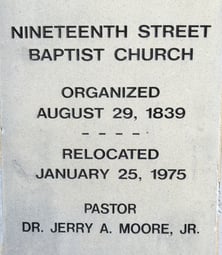 The B’nai Israel history notes that the congregation moved to its newly constructed building in Maryland in 1976. Somehow the two transitions came about at nearly the same time, though the synagogue may have needed a temporary space for a year or two. The transition work for the 19th Street Baptist Church, according to their cornerstone, was completed on January 25, 1975.

The exterior remained mostly the same. The new sign at the street clearly identifies the congregation with its name above the marquee. Crosses were added to the main doors. The congregation’s name and new scripture passages were placed above the three entryways. I understand that the small cross over the dome is a later addition, but it is entirely appropriate. Otherwise, the detailing and many symbols, shared with Judaism from the Old Testament, remain in place unchanged.

In a similar fashion, the interior utilizes the older symbols, but adds appropriate updates for Christian worship. The entry foyer includes a Star of David with a map of Israel inscribed on the floor. This space now also has a stained glass window and a small prayer room as an expansion. Together, the two symbols work to invite members to gather for worship. They also, very subtly, celebrate the building’s history of transition. 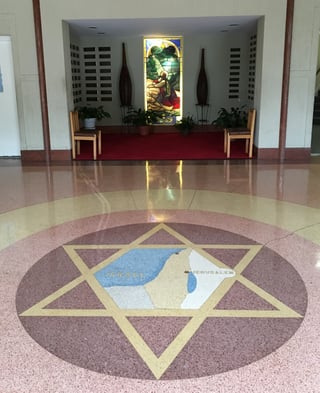 The worship space offers another important lesson for making the most of an existing space. The Baptist service would traditionally have a very different focus than Jewish worship. While I don’t have an image of the space arranged for B’nai Israel, the Bemah, or platform area, would most likely have featured the Ark, a precious place for keeping the Torah. These elements would of course have been removed when the old congregation left.

The challenge for the 19th Street conversion was to utilize the limited space as efficiently as possible. The crosses on the back wall visually center the new platform area. Much of the space on the right, facing the platform, is structured for the choir. The pulpit and table are built in, with stairs just behind the altar table to access the upper platform. The platform is tight, but there’s enough room to have chairs for the ministers and the pulpit is just off the center. 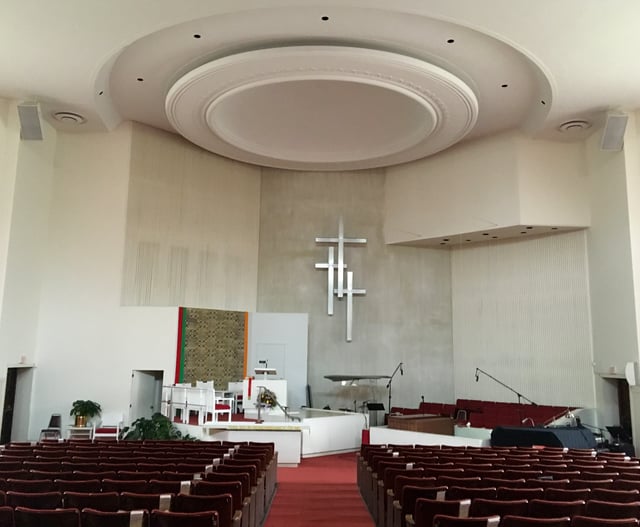 What is really interesting is the way the baptism works. The font is covered with plexiglass that forms a moveable floor for the platform. On Baptism Sundays, the several sections are removed and baptisms take place at the center of the platform, adjacent to the pulpit. Without a lot of room to work, all the important elements for the Baptist service were carefully laid out to be as efficient as possible. 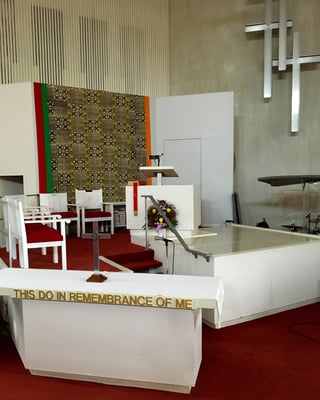 The staff was very gracious letting me take a quick tour through the facility. I mentioned how impressive the transition had been, with very targeted additions and changes. Since it happened four decades ago, no one could tell me who had been responsible for the redesign and adaptation program. However, as I left, one congregation member told me how proud they were of the change over. He said that not very long ago, a woman who had retired to Florida came with her daughter to visit. She’d been a member of the synagogue before it moved. He told me they both were very happy to see the sanctuary and the mother was able to describe what it was like when this was her place of worship. 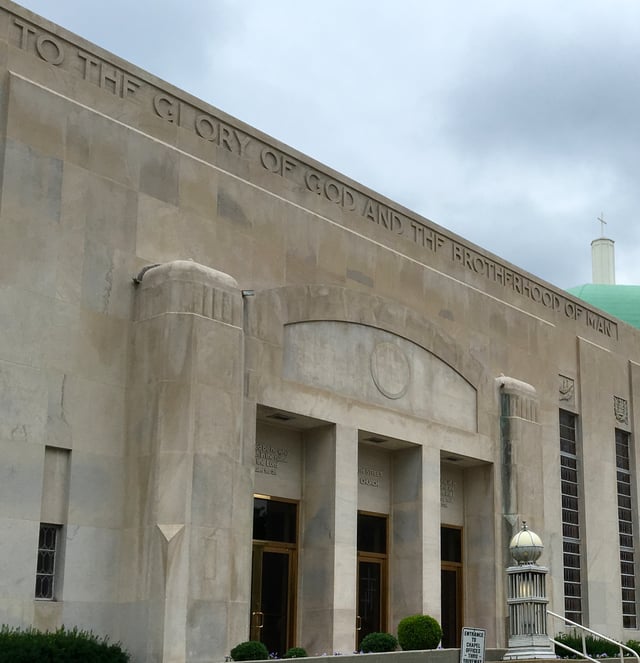 The carved phrase, “To the Glory of God and the Brotherhood of Man,” was part of the original architects’ design as a prominent frieze above the entry. It is fitting that Nineteenth Street Baptist, with its own long history as the oldest black ministry in Washington DC, would be so thoughtful and creative in embracing this theme for its adapted home. So many years later, we can still appreciate their wisdom in blending the old and the new.