From infinite forest to interlocking triangles, the NYC AIDS Memorial has progressed from a bold conceptual image of infinite trees to a newly installed park structure. Located at the tip of St. Vincent’s Triangle Park in Greenwich Village, the assemblage was dedicated on December 1 in honor of World AIDS’ Day. The original design was selected from nearly 500 submissions in a competition to honor the many millions globally, and over 100,000 in New York who have died from the disease. The intent of the competition was to raise interest in a permanent memorial, but there wasn’t a clear path to actually implementing it.

The winning design, "Infinite Forrest" continued to inspire the final design that was adapted to the realities of site and budget.

Fortunately, supporters of the memorial, the architects and the City contributed to develop and evolve the concept into the actual memorial. The initial plan envisioned the entire park surrounded by walls with interior mirrors, creating a space with trees that was defined by infinite reflection. With practical realities of budget and approvals, the architects rethought their design. The invitation to be reflective is now made by a metal structure of interlocking triangles. Both open and sheltering, the structure hovers over a stone floor etched with the words of Walt Whitman’s poem, “Song of Myself.” 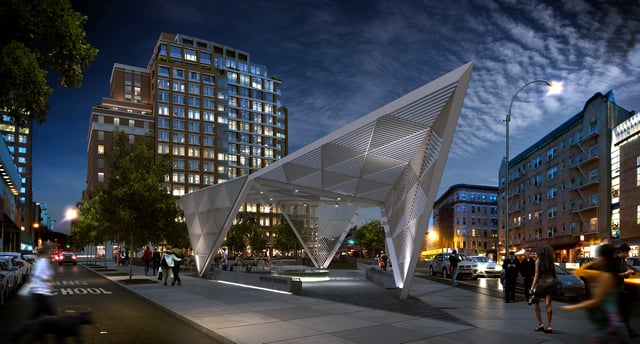 Rendering of the modified design that was dedicated on December 1, World AIDS Day.

The location for the site has other powerful associations with the early struggles to combat the AIDS epidemic. Greenwich Village was the center of a thriving gay community in the 1980’s when the mysterious disease began to inflict many residents. The adjacent St. Vincent’s Hospital was, for a period of time, the only institution that provided care for those afflicted.

Today, the hospital is shuttered with plans underway for conversion of the building to residential condos. The AIDS epidemic, though still a major threat, now has the world’s attention with innovative treatments and preventative measures openly promoted by health agencies and providers. The new structure will complement park improvements that form an oasis between busy New York streets. And with the formal dedication, New York City and the world now have a modest yet poignant memorial that invites reflection.