We’ve been adding to our information on Thai temple traditions over the past few weeks. The distinctive elements that adorn many rooftops and handrails have symbolic meanings associated with the animal world. And sometimes those symbols overlap; nothing is so fixed that it only means one thing or can only be done one way. That’s generating a lot of excitement as we consider a number of inspirations for the new temple design for Wat Buddhananachat here in Austin. 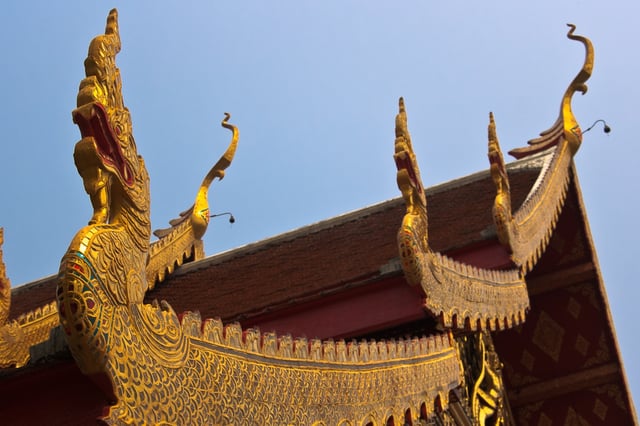 Highly ornamented finials grace the ends of the roof ridge and the lower fascia on traditional Thai temples. These are called chofas, which roughly translates to “tassel of air.” The curved shapes often take on birdlike forms. The chofa shapes can be compared to the elegant curve of a waterfowl’s neck arcing back over its body. The other comparison is that of a snake’s curved body. Now snakes and water birds would normally be thought of as prey and predator, a large snake making a feast of a small bird or its eggs, a hungry bird gobbling a young snake in one bite.

According to one blog on Thai architecture, the chofa may also be thought of as representing a garuda – a Hindu mythical bird who assists the God Vishnu. Or it could represent a snake or naga. In Hindu traditions, the naga is the half sibling of the garuda and its sworn enemy. But in Eastern philosophy, the opposites of some elements often are expressed as coexisting while in perpetual conflict. 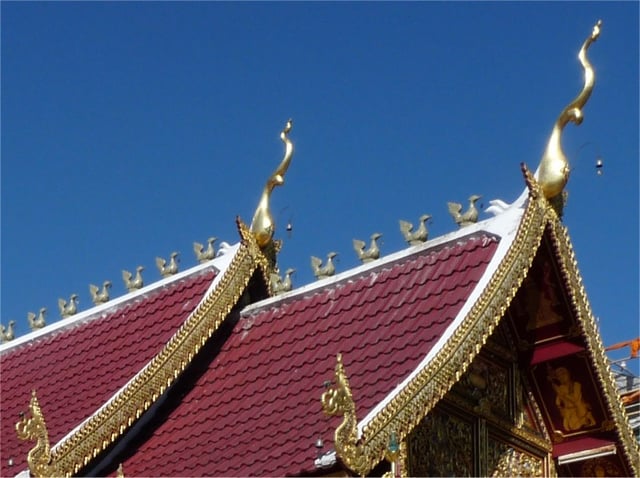 So why would Hindu iconography be associated with Buddhist temples? The Buddha lived in northern India where the Hindu religion was well established. As Buddhism spread, many elements associated with the region may have been highly influential. So it may not be all that unusual to associate some symbols in Thailand with other traditions from India, but that is just my own simple observation. 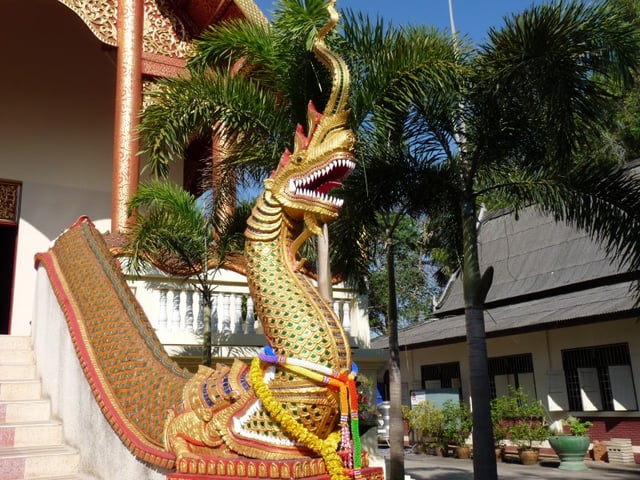 Thai traditions also include another placement of the snake, or naga, this one comes directly from the Buddha himself. At the ends of handrails, especially at the main entry, a stylized or literal representation of the snake greets visitors. This may seem like a hostile gesture, but the snake takes on benevolent attributes in Buddhism. According to tradition, while the Buddha was deep in meditation, the snakes felt compassion for his exposure to the sun and rose up to offer him shade. Images of the Buddha sometimes are shown with a crest of snakes above the Buddha’s head. Therefore, the naga at the entry stair is a gesture of welcome, even if the graceful chofa above may include some elements of tension.