It was Alumni Day at Trinity University when I stopped by today. The campus, known for its subtle architecture and sensitivity to the landscape was highly presentable. My goal was to visit the Parker Chapel on campus, one of O’Neil Ford’s signature designs. I realized that the building, dedicated in 1966, was now 50 years old. O'Neil Ford, Texas' modernist pioneer teamed with other architects for the master plan of Trinity University, but the design for the massive tower and the acclaimed Chapel are understood to be Ford’s work. 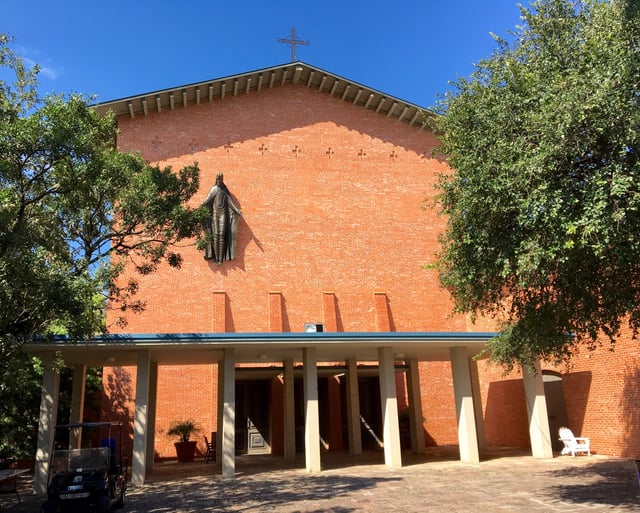 The plaza surrounding the tower and the front of the Parker Chapel was surprisingly intimate. A wing of the chapel forms a side of the outdoor gathering space. The front façade of the chapel is a tall, monolithic brick wall. Its scale could easily be overwhelming, but several key details make the wall relatable. The low roof pitch overhangs the masonry wall suggesting a roof or ceiling to the space. Inset crosses in the brickwork form an important focus and help frame the bronze sculpture placed off axis on the wall.   It is also interesting to see that the oversized entry porch actually stands in front of the chapel façade. Lower canopies project outward from each of the three doorways to provide shelter as a visitor enters. 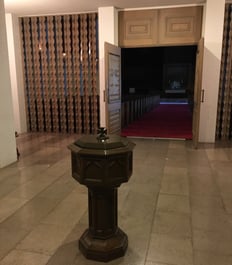 Once inside, the narthex is a low-ceiling space formed without pattern or additional ornamentationexcept for the highly detailed carved doors and wooden screed that transition to the nave. A modest baptismal font is placed in the center of the narthex, though it may be this is alater addition.

The nave is formed with a series of masonry arches. The deep spaces between each arch is emphasized by the natural light filtered through high windows with art glass and bits of color. A traditional chancel layout is designed with an altar table and pulpit both constructed with wood ornamentation relating to the doors. Though the main space is organized along the center aisle, the chancel is not symmetrical. The organ console is framed within a tall wooden wall on the right, balanced by an open choir space on the right. For the time, the space is remarkably open and spacious. The design has held up well in the past 50 years and anticipated many issues to function for multidenominational worship. 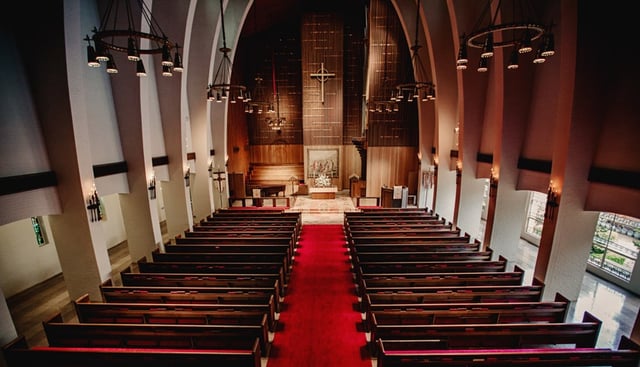 As I was leaving, the organist took his seat at the console. In the darkened interior, he began to practice a wonderful piece of music. The effect of this soaring yet intimate space filled with music was truly wonderful. I captured a bit of that spirit, I hope, in the short clip below.