In response to public tragedy some people literally take matters into their own hands. Illinois resident, Greg Zanis was moved to build 49 white crosses in the hours after the shooting at the Pulse nightclub in Orlando. He wrote the name of each victim on large red hearts in the center of each cross. Then he drove over 1,200 miles to Orlando to set up a suddenly sacred shrine, one of many he’s contributed to communities reeling from tragedy. 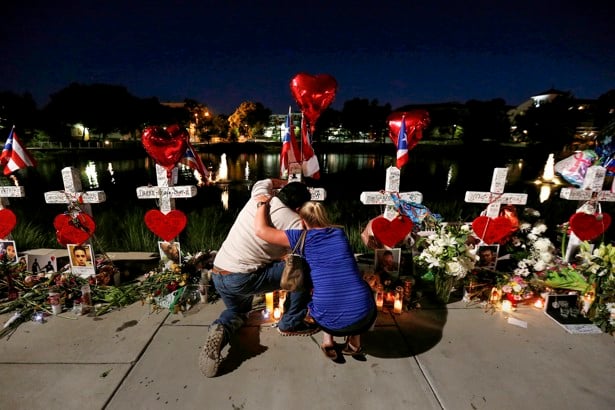 Zanis assembled the crosses across from the Orlando Health Medical Center. The crosses form a long line along the walk around a serene lake. Orlando residents have come to walk the line of crosses, many openly weeping as they are overcome by sadness or recognize a familiar name.

That was the motivation for this selfless act. Zanis is quoted in the Miami Herald, “I am doing it for the victims, but this is a public grieving. This allows the public a place to go to and have that big cry.”

Together, the long line of crosses shows the enormous size of the carnage, how many lives were cut short, how this violent hateful outburst caused such irreparable damage. Unlike the Boulder memorial, the ultimate fate of this assemblage has already been determined. Zanis wants the memorial crosses to be taken home by families and loved ones when the memorial is disbanded.