Our Lady Appears on Seventh Street

There’s a new siting of Our Lady of Guadalupe in East Austin. I spotted her in her newest location on East 7th Street several weeks ago so this morning, in need of coffee and a breakfast taco, it was time to take a closer look. The owners of the popular El Chile restaurants pioneered a fast Tex-Mex walk-up restaurant called El Chilito. The high quality but informal concept started with a resuscitated walkup diner on Manor Road several years ago. This second location, patterned after the first restaurant, and has been open for a year or more. With this new mural, it joins a number of popular East Austin locations sporting an image of Our Lady of Guadalupe. 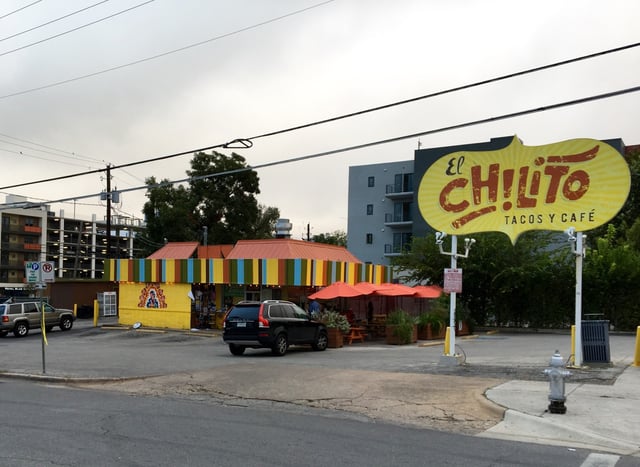 I have documented several of these public art pieces. One peeling image adorns a panel on the side of the El Milagro tortillaria. The other is a painted over and significantly altered version of a folk mural on a trendy restaurant wall. Here on East 7th Street, the latest image of the Virgin Mother is visible from the busy thoroughfare, but she really welcomes diners as they approach the window to order. The stenciled artwork shows the hand of sophisticated contemporary street artist. 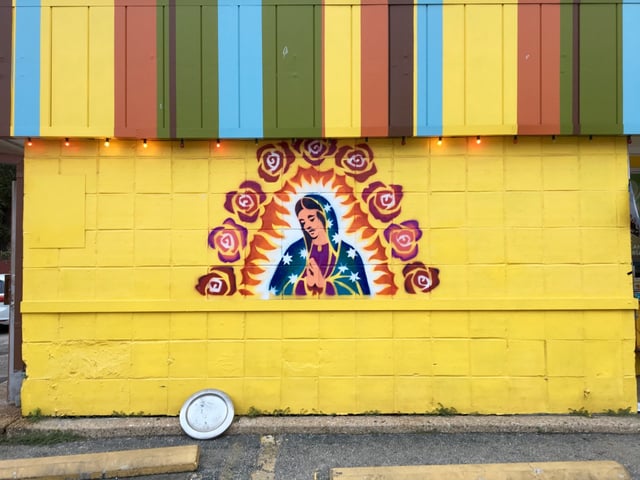 Asking about the mural, as I placed my order, I learned that Our Lady is actually a warm-up for a larger mural. “They’re going to do a bigger one on the Manor Road place.” It wasn’t clear if that mural will also reference a religious icon. But I’m sure I’ll find out when I do my next taco run.