Our Lady as Street Art

Today marks a milestone, the 182nd blogpost of 2016. Which means, dear reader, that we’re half way through this adventure. With the first entry on January 1, I took on the 365 Challenge. The idea is to create something new, once a day, every day for one year. As I wrote in that first post, my goal was, and continues to be to write about one place, image, or reference to a church, temple, or spiritual object every day for 365 days. 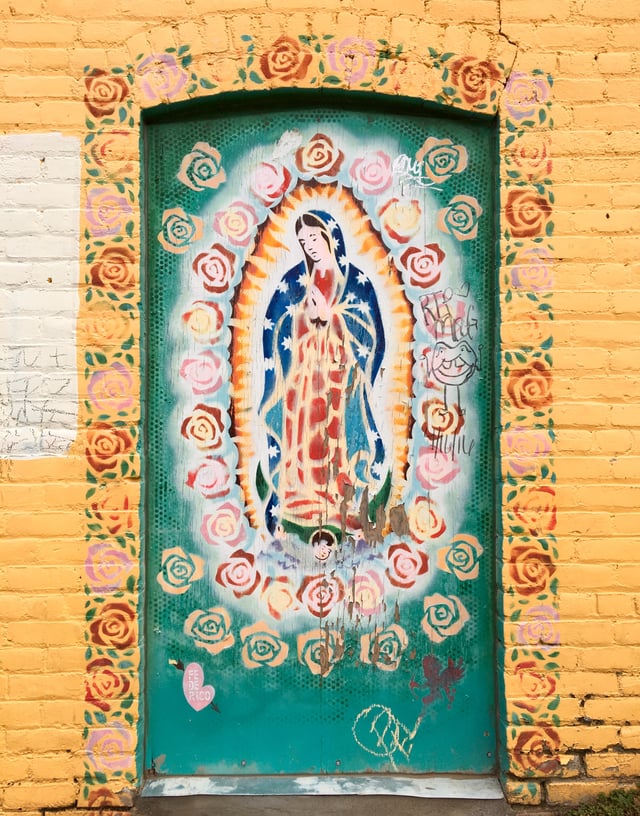 Thinking about some of the past months’ posts, this project has already helped me to be more observant. I’ve become more conscious of references to faith, religion, or spiritual traditions in both the physical and virtual worlds. It also has forced me to stop, sometimes literally. I’ve pulled out of traffic or bookmarked a webpage in order to spend time with something new, or to see a familiar thing in a new way. 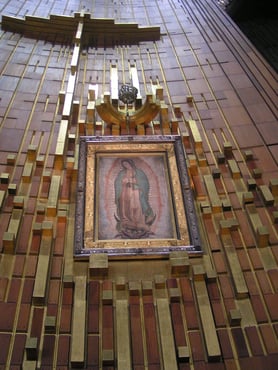 Yesterday’s stop is a perfect example. This iconic image of Our Lady of Guadalupe has shown up in many photo essays of hip East Austin. A similar stencil was included in the Drawing Lines Exhibit and I featured that photo of the photo in an April post. Even though I commute nearly every day on East 6th Street, it finally occurred to me that I had never stopped to look at Our Lady of Guadalupe on the side of the El Milagro Tortilleria.

Our Lady of Guadalupe is widely popular. She comes from the miraculous rendering that appeared on a poor farmer’s cloak in 1531. According to tradition, when the Virgin Mother appeared to Juan Diego and spoke in his native tongue, the local Bishop was incredulous. But when Jan Diego returned to present a bundle of Castillian roses, blooming out of season, it wasn’t the roses that convinced the Bishop. As Juan Diego unbundled his cloak, the image of Mary as an indigenous woman had somehow appeared on the fabric.

That very image of Our Lady of Guadalupe continues to be venerated. It is on permanent display at the Basilica of Our Lady of Guadalupe in Mexico City. But the picture is so closely identified with Mexican culture, it has been reproduced and repainted endlessly. It made perfect sense to me that a local street artist would try his or her hand at this sacred and cultural image. This one has been up for a while. Some of the paint is peeling. It is nowhere close to the Basilica. But does feel like it belongs right here, helping keep Austin pretty cool and pretty weird. 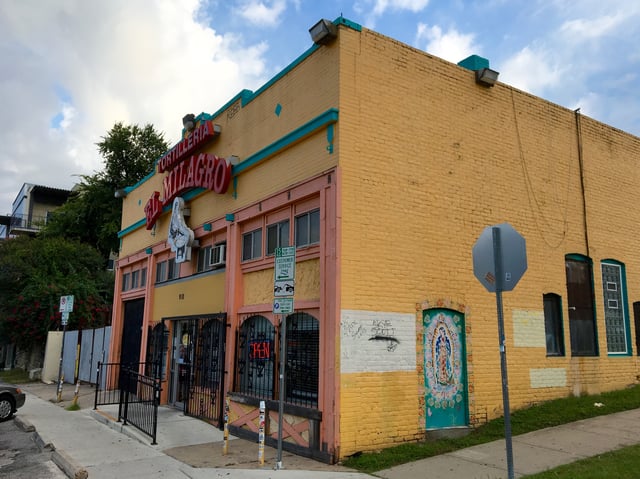 Our Lady of Guadalupe mural on the side of El Milagro Tortilleria, 910 E 6th St, Austin, Texas