This week, as the government army drove ISIS occupiers out of Palmyra, they found one of Syria’s most notable landmarks, the Temple of Bel, almost completely destroyed. For most Americans, unless they were art historians, this news must have seemed far removed.  I doubt many of us felt any connection or expressed much concern. Ironically, this interesting temple built at the outskirts of the Roman Empire over 2,000 years ago was one original source for our historic landmarks in America today.  Most of these American landmarks, by the way, are only 150 to 200 years old!  I’ve studied classical architecture and was at least aware of the influence ancient buildings from Roman and Greek history have had on western architecture. What I didn’t know is how the Temple of Bel became literally the source book for at least one classical design feature, the ornamented ceiling.

Many thousands of cherished American buildings from our classical era have amazingly artful ceiling details. In just about any library, or bank, or railroad station, or school built in the 1880’s through the 1950’s you will very likely see beautifully carved or molded detailing in wood or plaster. Geometric textures and patterns are often intermixed with floral designed leaves and other carved versions of plants and vegetation. 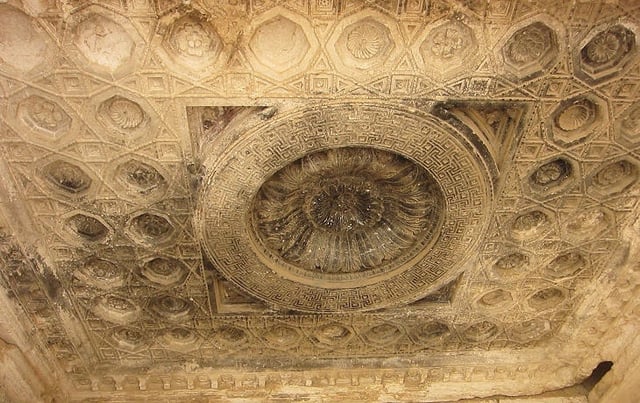 When Europeans began actively traveling to the Middle East in the 18th Century, they were fascinated with ruins from ancient empires.  Robert Wood published an account of traveling in Palmyra in 1753 and included copious drawings and etchings by one of his companions on the journey, Giovanni Battista Borra. These drawings created quite a stir and many architects of the day, including the influential Robert Adam, began to incorporate details inspired by or in some cases copying, the architecture shown in Borra’s images.  A fine explanation of the impact of the Robert Wood publication is described in the RomeArtLover blog. 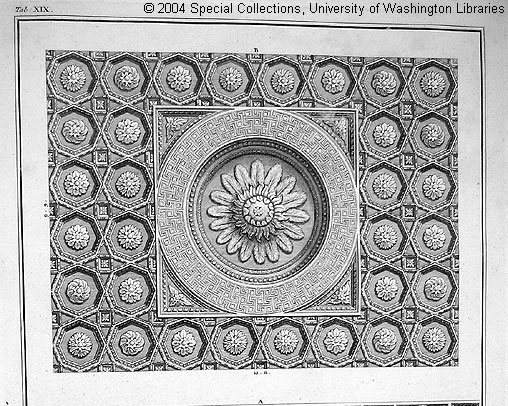 By the time Americans were catching up with English and other European trends, the ornamented ceiling was an established feature.  So we can trace at least one original source of our civic architectural heritage to the Temple of Bel, a religious architectural antecedent. And the destruction of the Temple of Bel is now confirmed.  But without a bit of investigating, few of us would know why that mattered.