Peacocks, Vines and a Cross - Ancient and New Symbols for the Early Church

This stone marble panel likely came from a European church, monastery, or convent in the 6th or 7th century. The image of two peacocks surrounding a cross would have been understood as a merging of the ancient symbol associated with Juno, the Roman mother goddess and the relatively newly adopted symbol for Jesus and the Christian church. This panel now resides in the Houston Museum of Fine Arts near a portal to one of the main galleries. 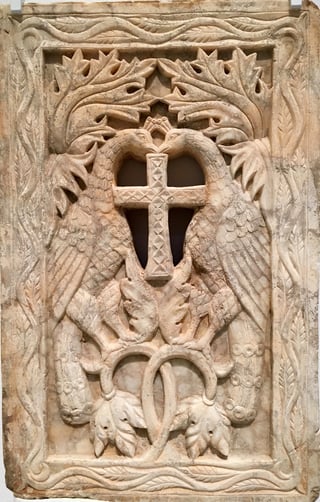 This mix wouldn’t have been surprising to its viewers. Romans also associated the peacock with immortality; the flesh of the bird was believed to be incorruptible. So Early Christians adopted the symbol of the peacock associating it with the immortality of the soul. Other similar carvings from the same era show these symbols were used as funerary images on sarcophagi, the joined peacocks and cross offering a reminder of the eternal afterlife.

On this panel at the MFAH, the cross and peacocks are surrounded by vines and leaves. One further interpretation is the two together are symbols for the sacred body and blood of Christ. The museum offers a text suggesting the possibility that the vines, the source of wine, and the peacock, the incorruptible flesh, would together be a symbol for Christ. That the cross is in the center makes perfect sense, since it’s origin wasn’t necessarily ancient and may have only been widely adopted several generations earlier as the symbol for Christ.