The seriousness and serenity could be felt half way around the world. I felt it this morning watching the livestream of the historic joint service of Common Prayer celebrated by Pope Francis and the leaders of the Lutheran Church. My comments yesterday in anticipation of this momentous event didn’t begin to catch the significance of both Catholics and Lutherans worshipping together in recognition of the 499th anniversary of the start of the Reformation. It was fitting that the event, held in the ancient Cathedral in Lund, Sweden, was a ceremony of healing and reconciliation. 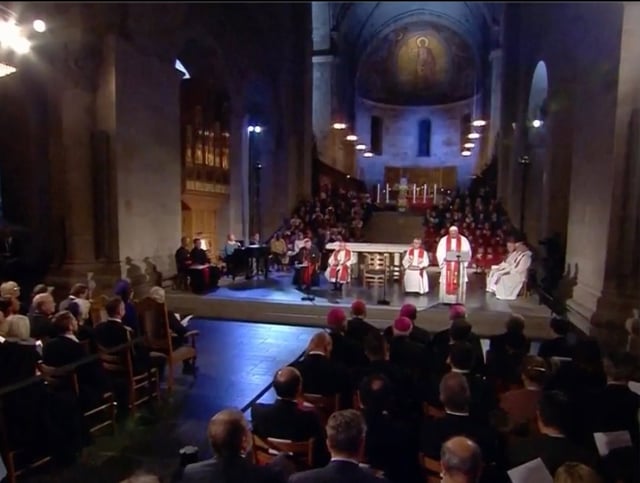 The entire event was infused with hugely symbolic images and words. The poetry of the finely crafted Common Prayer service was merely a setup for the beauty of the General Secretary Rev. Lund’s sermon offered an image of the two communities leaving behind their rancorous past, turning from weaponry toward unity, and looking clearly towards the next challenge: “And if tomorrow God would see us holding stones in our hands, like those we carried in former times, may they not be thrown at each other...Rather, may God find us building bridges so that we can come closer to each other, houses where we can meet together, and tables - yes, tables - where we can share bread and wine, the presence of Christ, who has never left us….”

Pope Francis, in his words, did not address specifically the issue of the Eucharist, where the two churches have significant disagreements. He called for both to “…look with love and honesty at our past, recognizing error and seeking forgiveness.” He continued to expand his faith that God’s people would know the way to reconciliation: “…our division distanced us from the primordial intuition of God’s people, who naturally yearn to be one, and that it was perpetuated historically by the powerful of this world rather than the faithful people…” 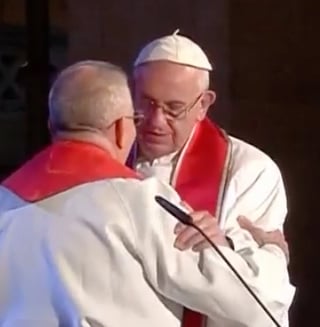 The Pope looked forward noting the path includes the two churches working together and the rest of the world would be watching: “We Christians will be credible witnesses of mercy to the extent that forgiveness, renewal and reconciliation are daily experienced in our midst….As Lutherans and Catholics, we pray together in this Cathedral, conscious that without God we can do nothing. We ask his help, …so that together we may bring his word to the world, which so greatly needs his tender love and mercy."

With so few hopeful events in the cacophony of our daily news, I was heartened to see at least a few outlets, NPR and the New York Times, squeezed in a mention of the event. Let’s hope there’ll be even more reporting about this amazing moment of healing and reconciliation.