At the heart of Portland, Maine’s vibrant downtown stands a bronze statue on top of a granite base. Named originally the Soldiers and Sailors Memorial, its composition is similar to many built after the Civil War. Somehow, Portland’s efforts resulted in a monument that has remained at the center of life in Portland over many generations. And the monument’s success may have least a little to do with the amount of time and effort it took to actually get the monument built.

Local historian, Herb Adams noted that of the many memorials erected after the Civil War, the early ones were expressions of grief, but that later works were monuments to glory. Portland’s efforts to commemorate those who fought and died began just a few years after the conflict. But fundraising floundered and a devastating fire in the city severely curtailed efforts to erect the memorial. Finally, in 1883, a retired general took up the challenge and plans began in earnest. The final dedication took place with great fanfare in 1891, more than a quarter century after the war ended.

Historian Herb Adams lectures in front of Our Lady of Victories.

Designs were solicited from leading artists of the day, though the choice of the sculptor, native son Franklin Simmons, seems to have be predetermined. His design for Our Lady of Victories was based on the Greek goddess Minerva adorned with symbols of victory and peace. The design for an appropriate pedestal went to Richard Morris Hunt who had just completed a similar composition for the base of the Statue of Liberty. 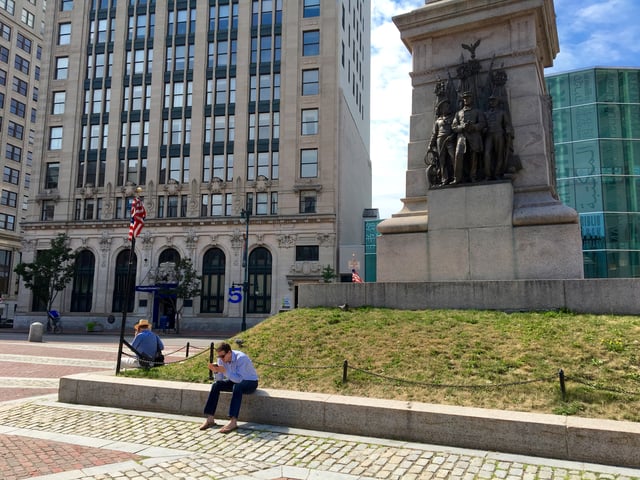 Selecting the location for the monument proved to be a challenge. An old city hall structure was located in the central market square. The plan called for tearing down the old building and replacing it with the monument. A city referendum was held with strong support in favor. However, the losers apparently weren’t satisfied and the State of Maine held a second referendum where, once again, the majority approved. With that decision, the monument came to be the focal point of the square, now called Monument Square, and in many ways the focal point for all of greater Portland.

That’s the assessment expressed by many present-day residents on the website Yelp. At 4 ½ stars, Monument Square ranks with the top restaurants and entertainment venues in the city. One Yelper, Steff D left comments that summed up the feeling pretty well:

“Monument Square is more than just a statue, though - it's a town square of sorts that becomes the temporary home to loads of different, wonderful Portland-y things like the Wednesday Farmers' Market, Alive at 5 Concert Series, our annual Christmas Tree, Dark Follies performances during First Friday Art Walk, the International Pillow Fight Day in April, Parking Space Day in September, protests of all kinds, parts of the Old Port Festival, and excellent people watching just to name a few.

It's an integral part of Portland and one that always reminds me of what a gorgeous, vibrant, cultural, welcoming city we have.” 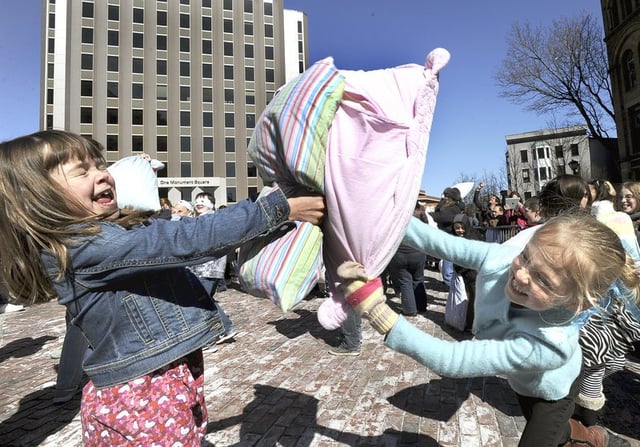 Here’s the Portland Press Herald’s picture from the 2013 Pillow Fight. I’ll bet the retired general, and his many contributors would be quite confused, but equally proud that their vision is still celebrated in modern Portland.