Enter through a side door of St. Paul’s Chapel on the Columbia campus in Upper Manhattan and make your way down a flight of stone steps. On your left is a vaulted stone room, designed originally for storage. But come on a weekend night during the academic year, and you’ve arrived at a treasured folk and acoustic music venue, one of the few remaining student run coffeehouses from the 1960’s. Stay for a performance, and you’ll experience the magic of the Postcrypt. 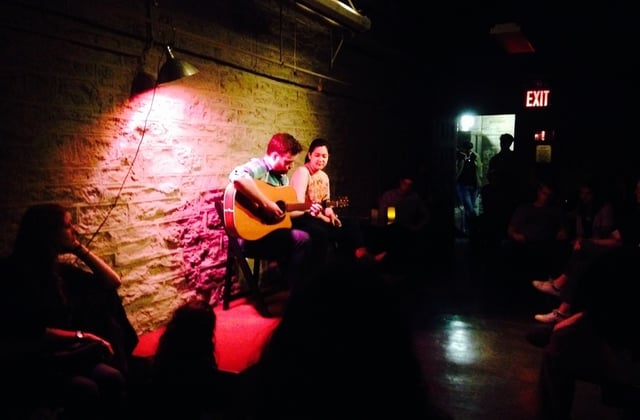 As an underclassman, the Postcrypt became my home away from home. Living on a tight budget, it was one of the few places I could go on a Friday or Saturday night in New York that was free. Intimate performances from student and professional musicians felt warm and welcome, in contrast to the impersonal and chilly city outside the campus gates. I came early and helped the upper classman who ran the place set up the tables, rig up the bare bulb spotlight and begin simmering the cider we had available for tips.   And when the old manager graduated, he gave me a list of phone numbers for local musicians and a mission statement: “Keep the place alive.”

So the next semester, I contacted the Verger who kept things straight at St. Paul’s and who also kept the key. I brought the old pots and utensils back to the dorm room to wash them for batches of cider. I called a few numbers to arrange performers for opening night. A recent Barnard grad starting to break in to the Village music scene was among those who agreed to come. I drew up a poster, xeroxed a bunch of copies, and put them up all over campus. 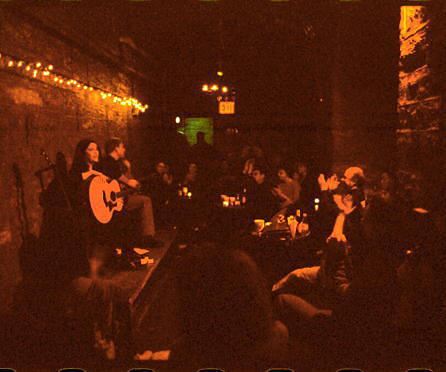 An evening from the Postcrypt Facebook Page, performers unknown.

That first night, Suzanne Vega and her friends kicked off the season. As I look back on the evenings that followed, I have flashes of many moments from many magical performances. But Suzanne Vega’s comments that first night stayed with me the whole time I ran the Postcrypt. Settling back on the simple plank platform, she looked directly at all of us in the audience and said, “You may know I’ve been playing in a lot of places downtown, but what I love so much about the Postcrypt, is that everyone here really listens.”

The Postcrypt has endured and survived many challenges. This short film documents a 2010 crisis as intrepid managers face fire code and electrical violations.

Many, many thanks to friend and fellow Glee Club alum, Beth Knobel, for alerting me to the Spectator’s feature about this new season at the Postcrypt!

Postcrypt Coffeehouse is located in the basement of St. Paul’s Chapel (1160 Amsterdam Ave.) at Columbia University in New York City