It’s distressing these days that bad news, even fake news get spread all over, while really good news seems to gets lost or sinks below waves of acrimony and vitriol. This weekend, however, a truly heartening event bobbed up high enough to get noticed. The Houston Press ran a feature about a crowd gathered outside a mosque in Houston to demonstrate their support!  The group of several dozen greeted Friday worshippers at the Islamic Society of Greater Houston with smiles, hugs, and signs of encouragement. 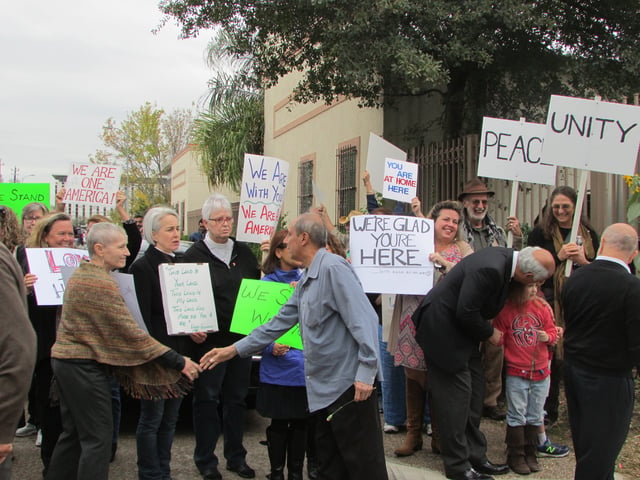 Ministers and members of other religions participated in the support rally, but this wasn’t a religious gathering. Organizer Stephanie Koithan said her motivation was to counter the spread of fearmongering and hateful rhetoric that proliferated during the campaign. “…(T)hat tells an entire community of people that they are not welcome. We have to create the America that we want — that's kind of what made me start this event."

The Islamic Society of Greater Houston has been a Houston institution for 55 years and has grown into one of the largest Islamic Societies in North America. The group actively promotes its diversity, and its website notes the organization supports 21 Islamic Centers and mosques. The spirit of inclusion applies to the group’s well-organized democratic governance where leaders are elected annually. According to Wikipedia, though most members come from a Sunni background, there are a significant number of Shias. 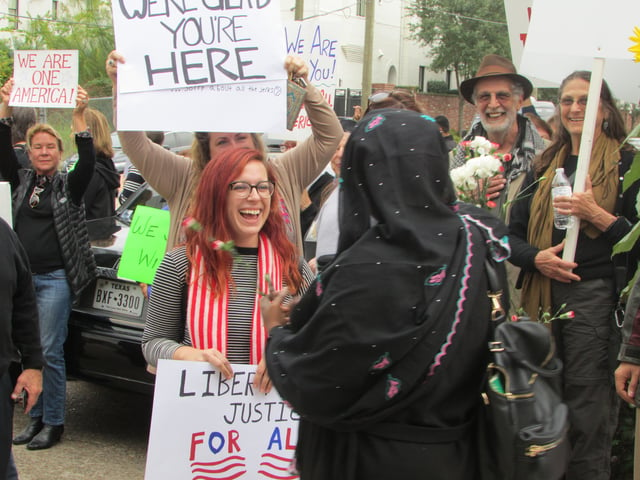 All photograps are from the Houston Press.  Meagan Flynn

The goal of the rally was to lift the spirits of ISGH members. Supporters brought signs saying, “We’re glad you’re here,” and “We are with you, we are all American!” The demonstration, it appears, was greatly appreciated. Members invited the rally participants in to the mosque to share refreshments and to have an impromptu conversation about religion and community. As one member said, “I didn't think I'd get emotional, but just seeing everybody out here taking time out of their day and their lives, it's just very sweet.”