Recognizing St. Philip After Its Demise

I actually did have a lunch once at St. Philip Pizza Parlor & Bakery. They’d closed the bakery by then, but the pizza was pretty good. St. Philip opened in October of 2014. By November of last year, the popular eatery was toast. According to the Austin Business Journal, the owners of the celebrated Uchi and Uchico restaurants decided to stay with their signature Asian fusion food and were leaving the pizza business for good. It didn’t help matters that pastry chef, Philip Speer was arrested for a DWI and dismissed from the franchise.

The failed Austin St. Philip used a pretty classy logo as a spare embellishment to the bold text. The crown shape may have more to do with the shape of the pizza than a symbol of the saint.

There is a logic, however, to christening a pizza parlor with this name. St. Philip was called by Jesus to be one of the twelve apostles. He was noted as a follower of John the Baptist. He lived in the Bethsaida area on the Sea of Galillee. On the same day Jesus recruited Peter and this brother Andrew, he sought out Philip and called out to him, “Follow me,” and Philip obeyed. 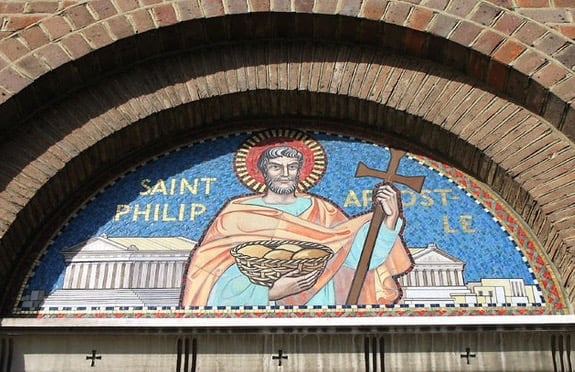 St. Philip mosaic above the entrance to the church in Finchley, UK (Martin Addison, Creative Commons)

His name is mentioned only a few times in the New Testament, though he figures prominently in one of Jesus’ major miracles. In John’s Gospel, when Jesus notices the huge crowd needs to be fed, he asks Philip where they could buy enough food for the crowd. Philip responds six-months of wages wouldn’t buy enough for everyone to just get a little. Jesus instructs the apostles to distribute a few loaves and fishes and everyone in the crowd, estimated to be 5,000, eats their fill with plenty left over. 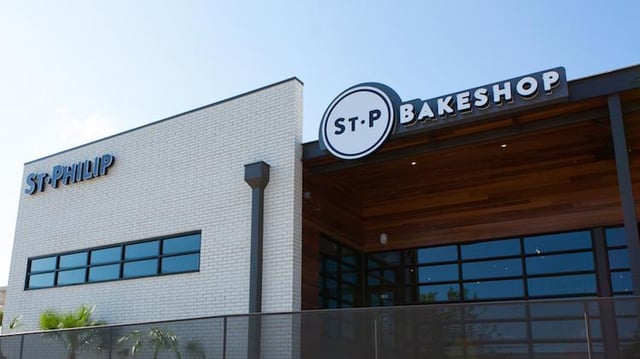