On this first day of competition at the Rio Olympics, the world is watching. And the world is seeing over and over aerial images of the city the iconic statue of Jesus in the foreground. With all the buildup to the Olympics, I’ve seen features on the Rio’s food, its beaches, its crime, and its politics, but I hadn’t seen any explanation for the Christ the Redeemer statue that symbolizes Brazil. The figure stands over the city’s skyline looking down benevolently on the population. With all those news outlets covering the games, I knew someone had to have looked into the story behind the statue.

But first, I checked the Wikipedia page for Christ the Redeemer. The idea for a Christian monument on the prominent site was initially proposed in the 1850’s to honor a member of the Brazilian monarchy. By the 1920’s, the monarchy had been replaced by a republic for many decades and group began actively promoting the idea for a Christian monument again. They wished to address what many perceived to be “Godlessness” in society. To celebrate the 100th year of Brazil’s independence fro 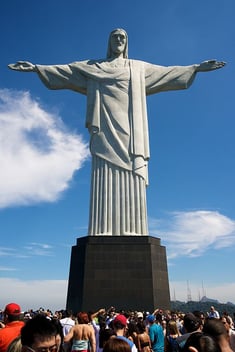 m Portugal, the Catholic Church sponsored a competition that was won by local engineer, Heitor da Silva Costa. He collaborated with French sculptor Paul Landowski on a statue that is roughly 2/3rds the size of the Statue of Liberty. The structure is made with reinforced concrete and the figure’s exterior is made of durable soapstone.

I can't say whether the statue actually made the people of Rio more Godly, but the image of Christ with a wide embrace clearly has been embraced.  The figure's sweeping gesture, and the slightly downward tilted head convey a sense of both protection and compassion.  Christ the Redeemer is not only a symbol of Rio, he has come to represent the entire nation as well.

A bit more looking onlnine and I found what I was looking for - a newly posted media clip about the statue. Indianapolis anchor Scott Swan filed this report for today’s WTHR broadcast. He notes that work on the statue began in 1922 and was completed in 1931. Christ the Redeemer stands 124 feet tall and outstretches his arms for a massive 90 feet. Every year, two million visitors trek up Corcovado Mountain to the base of the monument. The view of the city, surrounding landscape, and ocean is certainly a big draw, but they mostly come to encounter the famous image of Christ.   And, as Swan notes, everyone wants to take selfies. With outstretched arms, of course!