I’ve spent a lot of time on Robert T. Martinez Jr. Street in East Austin. Our firm worked on the new Metz Elementary School in the early 1990’s. In 2001, my wife began teaching at the same school. Today, I’m writing this from Metz as I’m helping my wife prepare for the start of school tomorrow. I’d known that the name of the street was originally Canada Street, but otherwise had no information about Robert. T. Martinez Jr. Today, I found Martinez’s End of Service Memorial and now know the story. 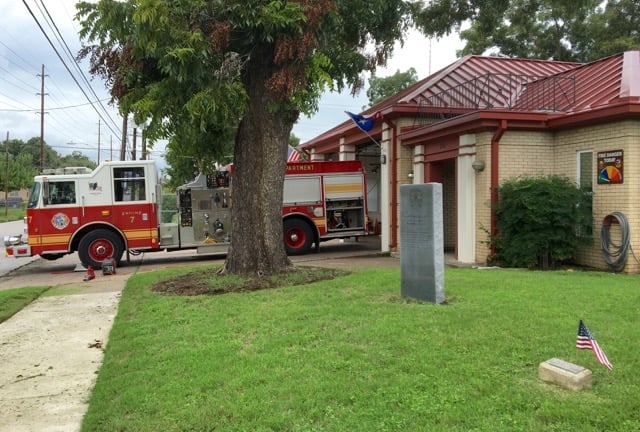 Robert T. Martinez Jr., known as Robby, was a young police officer at the time of his death. According to the monument, he was killed in a traffic accident while responding to an emergency call. A truck pulled suddenly in front of him. He swerved to avoid the truck and crashed into a tree. Robert T. Martinez was 26 years old when he died on February 25, 1989. Martinez was the son of a police officer. His father, Robert T. Martinez, Sr. died in 2003 having served the Austin Police Department with distinction in many roles, including Tactical Operations, Special Crimes and Under Cover Narcotics. 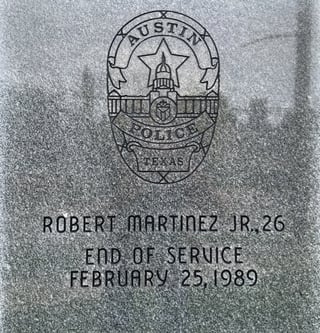 The Robert T. Martinez monument is located on the front lawn of the neighborhood fire station at Chicon and 2nd Street. Adjacent to the monument is another memorial for a deceased first responder. A plaque and flag on the ground is in memory of Fireman Clarence R. Doherty who was killed in action in WWII, April 9, 1943. There’s no street named for Clarence Doherty, but the plaque notes a tree planted in Doherty’s honor. The closest tree is a newly planted sapling. Perhaps this replaces the original.