A jarring scene of death and agony is the central feature of an otherwise simple public plaza a few blocks away from the major tourist sites in downtown San Antonio. The Vietnam Veterans Memorial depicts a battle scene. Though there’s a long tradition of statuary showing soldiers in proudly engaged in conflict, the emotion captured here is agony and terror. 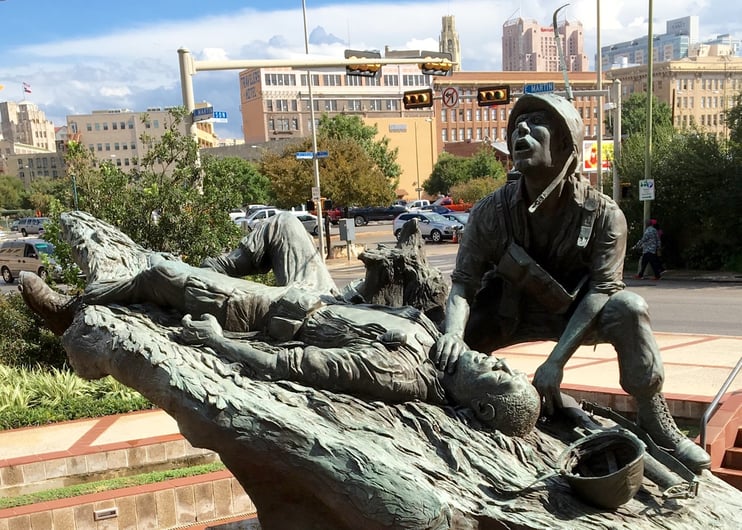 Two larger than life figures are meticulously rendered in bronze. One of those figures, however is lifeless, laying prone on the ground. Kneeling over him, with a hand extended to check a pulse is another soldier in full battle gear. The kneeling soldier is looking up and crying out in utter agony. The story leaves nothing to the imagination. In the midst of combat, the fallen soldier is dead. The level of detail is truly remarkable. One could almost imagine some sci-fi freeze ray zapping scene the instant it took place, then scaling it up and reproducing it in bronze, thereby capturing it forever. 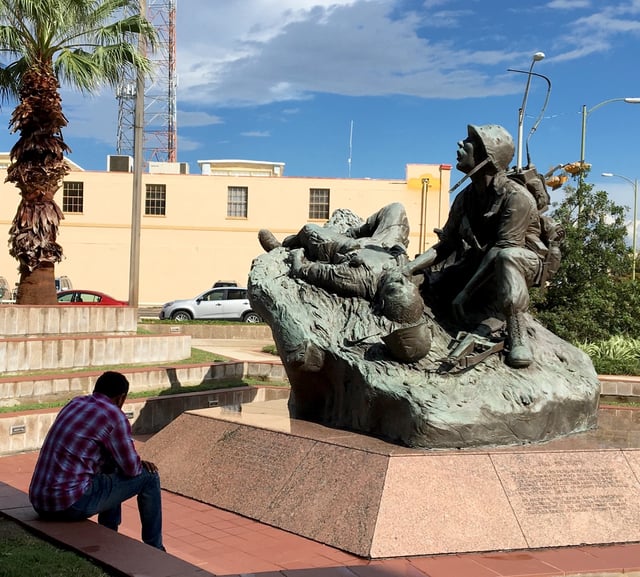 It is interesting to note that this plaza and its featured sculpture were dedicated in 1986. According to a website promoting the Memorial, the planning for this installation began a few years earlier, the first event noted is approval by the City Council in 1985. That suggests this memorial was conceived of in reaction to another Vietnam Veteran’s Memorial, the one on the Mall in Washington D.C. That memorial, since its opening day in 1983, has become the enduring image of America’s response to the tragic Vietnam War. The angled granite walls with the names of the 58,307 men and women who lost their lives in the conflict attracts over 3 million visitors each year. The Vietnam Veteran’s Memorial in Washington is ranked among the top architectural landmarks in America. 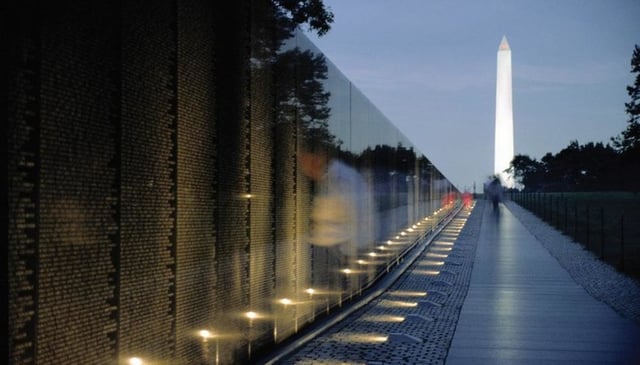 But in 1983, the DC Memorial was highly controversial and highly criticized by many in the military. The black marble and the placement of walls sloping down into the ground were derided as “deep gashes.” The biggest criticism was that the memorial wasn’t appropriate, since, in many people’s minds, it needed to include statues. Eventually, in response to pressure, the Vietnam Memorial did add a bronze depiction of three soldiers in 1984. When visitors come, they may note the soldiers’ presence, but they interact with the walls by touching the names, by praying, by leaving mementos.

Now, both memorials are more than 30 years old. When I visited the San Antonio memorial, the one with the intense depiction of an actual battle scene, only one person was there. He was sitting and checking his cell phone. A handful of tourists walked by on the street and barely glanced at the sculpture. There's no doubt of the genuine intentions for the San Antonio Memorial in trying to capture the significance of the sacrifice of so many Americans.  While there’s nothing wrong with the literal depiction, there’s an important lesson here. Emotional involvement can’t be forced. The scene in San Antonio is so horrific, it’s easier to ignore than to engage.  In comparison, the image projected by the DC memorial is deceptively simple and unthreatening, up to the point where a visitor has to stop and think about what the wall and all those names actually mean.