Yesterday’s post about the demolition of the Old Mount Sinai church structure has surfaced some very important issues. In today’s Austin American Statesman, an editorial by Alberta Phillips faults the City for its historic landmarks review process. She was particularly upset that a city staff member ok’d the demolition permit without having it reviewed at a meeting of the Historic Landmark Commission.

I agree that many East Austin Churches are threatened and need to be seriously considered or they may soon be lost. However, I think the editorialist’s concerns are misplaced. When I served on the Historic Landmark Commission, I strongly pushed to have staff take responsibility for routine reviews. I felt is was important to utilize the judgment of our professional staff to make sure that the buildings brought before the commission would have at least some chance of meeting the exacting criteria for designating a structure as a City of Austin landmark. At the time, we were reviewing dozens of projects involving older buildings that had no merit or reason for being considered as a landmark. Without the staff’s review, some owners had to wait months just to have the Commission release an otherwise completed building permit. Some were even churches that needed to make changes or updates to better serve their ministry needs.

I have been photographing and blogging about older churches in Austin. These buildings have historically been major centers for community and congregational life and are unquestionably local resources. Yet East Austin neighborhoods are experiencing major changes as new residents arrive. Many established churches continue to serve determined congregations. Whether or not they adjust to their changing neighborhoods is an open question. It is reasonable to assume that a number of these churches will be on the market in the not too distant future. In some cases, newer congregations have bought and taken over older churches. These groups may or may not be local ministries and may not have deep ties to their surroundings. As they grow, or as their needs change, these buildings will certainly be back on the market. 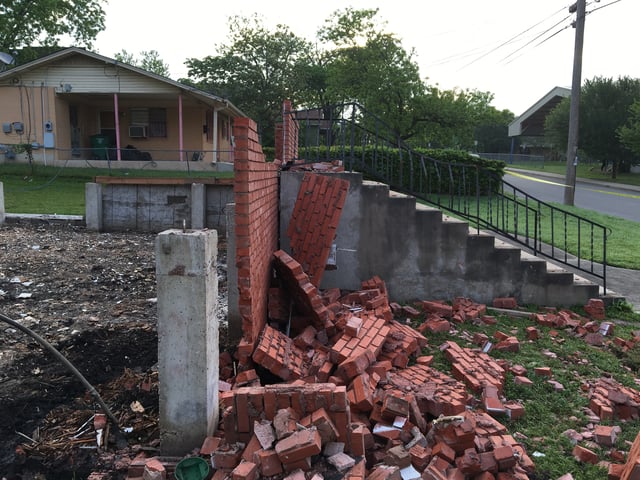 That appears to be the situation with the Old Mount Sinai church. It looks like Mount Sinai has not owned or been associated with the property for decades. Google lists a St. Matthew Baptist Church at the Poquito Street address. An internet search doesn’t turn up any new or changed location for St. Matthew. One can assume that this church shut down and sold the property to a new, non-church owner. Looking at the condition of the building from the photos, I think that Steve Sadowsky, the City’s Historic Preservation Officer made the right call.

But that doesn’t offer any real guidance for the large number of older East Austin churches currently in use. Many churches, in updating or adapting to new ministries will need to make changes or alterations to their older buildings. Many have distinctive, if not exceptional architectural features. It is in all our interests to look seriously at ways to preserve and facilitate new or changing uses for these places. Should East Austin churches be designated landmarks? That solution is limited actually to very few qualifying structures. Many churches may not be ideal historic landmark candidates, or may not want the encumbrances associated with the designation. But East Austin churches should continue to be neighborhood assets, whether or not they remain as places of worship.