Sikh Symbolism OK’d by US Army

A small note cropped up in the Huffington Post’s on-line news feed: “Army Rules Sikh Officer Can Keep His Turban, Beard On Active Duty.” After a number of appeals were denied or ignored, Captain Simratpal Singh had sued the U.S. military. The army’s refusal to allow him to observe his religious obligation to remain unshaven and to cover his head with a turban constituted religious discrimination. Singh is a decorated veteran and a West Point graduate. After initiating tests to determine that these religious observances would not impeded his role in active duty, the army dropped its objections and granted Singh’s accommodation. 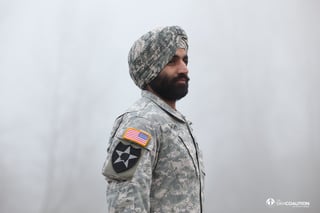 The accompanying photograph, to me at least, looked very familiar. A smartly appointed military man with a full beard and mustache is wearing a turban. The Sikh Coalition has a number of resources explaining the religion and the significance to the faithful of five physical symbols including the beard and turban. Though Sikhism is a relatively young religion, originating only 500 years ago, its fundamental teachings of egalitarianism, fairness, and justice have also produced a proud tradition of military honor and discipline. 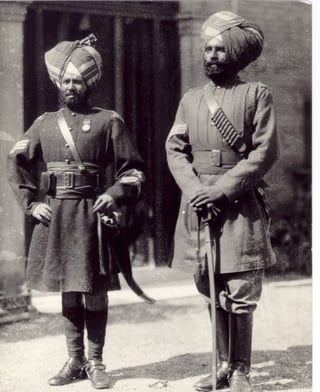 Sikh units historically have been highly regarded in the Indian and British armies. The image of a noble turbaned soldier is enshrined in military and East Indian history.

The Sikh warrior tradition, however, is not that of the aggressor, rather, the defender of the oppressed and defenseless. According to one scholarly presentation, Sikh teachings include three rules of martial engagement:

Captain Singh’s statement about his military service and his religious tradition makes perfect sense: “My military service continues to fulfill a lifelong dream. My faith, like many of the soldiers I work with, is an integral part of who I am. I am thankful that I no longer have to make the choice between faith and service to our nation.”