“Let the world see the magnificence of Indian culture and heritage.”

That’s the last line in a promotional video for the skyscraper temple now in the planning stage. The location in the Northern Inda Braj region is associated traditionally with Krishna. So it makes sense that this audacious enterprise would be devoted to the Lord Krishna. Once completed, this towering temple will be, according to the Construction Specifier the Magazine of CSI, the world’s tallest religious structure. 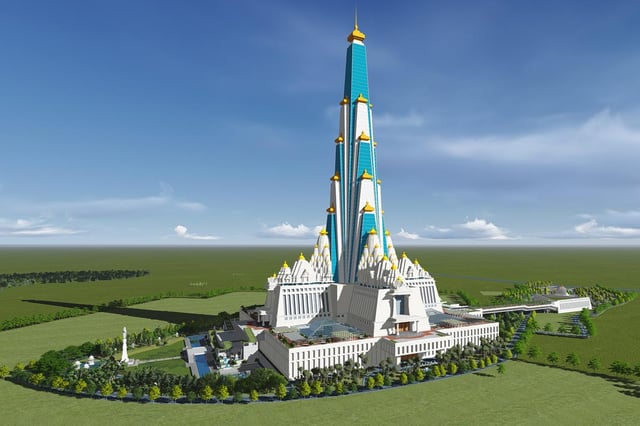 The group behind the visionary project, the International Society for Krishna Consciousness (ISKON) was actually founded in New York in 1966. Swami Prabhupada drew upon his background in traditional Hindu scripture to give his religious teaching a modern update. With a focus on yoga and meditation, his organization also promoted modest living while actively preaching in public and recruiting new members. In popular culture the group is more commonly known as the Hare Krishnas.

The Swami’s teachings focused on Krisha as the supreme diety. Among the seven founding purposes of ISKON includes this edict:  “To erect for the members, and for society at large, a holy place of transcendental pastimes, dedicated to the personality of Krishna.” Though ISKON has grown to an international organization, it is worth considering that plans to build this skyscraper temple for Krishna come, with love, from America.