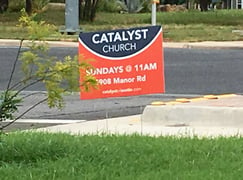 The past few weekends, I’ve noticed yard signs for new congregations. Perhaps they were there previously, but with such a clutter of campaign signs in the past months, they may have been obscured. Today, there were two signs for two different churches. I thought it was time to look closer at these startups.

Earlier this month, the Austin American Statesman ran a profile of a minister and his family following their calling to start a new church. One of the signs I saw was for Catalyst of Austin, which turns out to be the mission of Steve Blake, the pastor profiled in the Statesman. 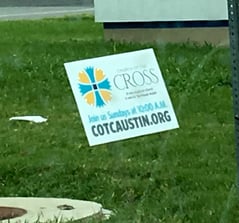 The other, Church of the Cross, is a church plant of the Anglican Church in North America. This denomination was formed in 2009 as a result of a break with the Episcopal Church. At the time, church leaders set a goal to plant 1000 new churches. The program, Anglican 1000, is the impetus for Church of the Cross started by Peter Coelho.

Both churches have very well produced websites with great information about who they are and what motivates their ministries. Though their signs are small, their visions are large. The Statesman article notes that one third of startup churches fail within the first four years. It will be worth tracking these new congregations, but they look like they are off to great starts.