Friday morning two police cars were parked in the plaza in front of the Dallas Police Department Headquarters and the flags flew at half-mast. It may have been unintentional, those two cars became a suddenly sacred shrine in the aftermath of the shooting that left five officers dead and many injured. By the end of the day yesterday, news photos showed flowers, balloons, signs and hundreds of notes completely covering the police cars. 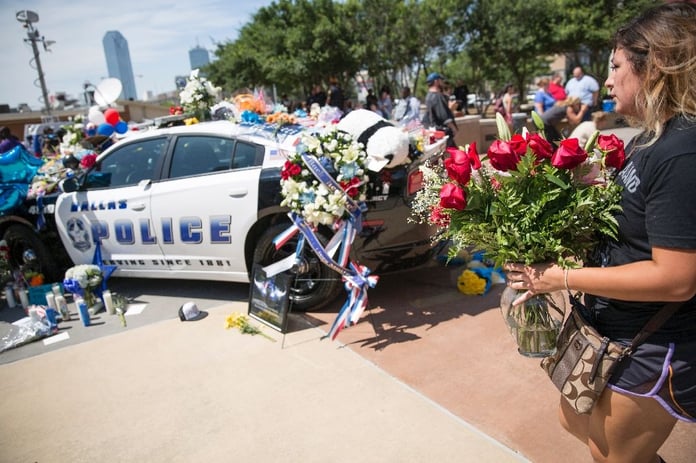 On NPR’s Morning Edition today, reporter Sam Sanders notes that Dallas, “….is a city in mourning.” He interviewed a teacher who came to see the crime scene and waited just outside the taped off area. “I don't know what I'm looking at. I don't know who I'm supposed to be talking to or how I'm supposed to process it.”

It is impossible to make sense of such turmoil and carnage at the end of what had been a peaceful march in support of the Black Lives Matter movement.  With the shrine at the Police Department, I believe that Dallas is finding a place for unity and common ground. Everyone I heard interviewed, from the organizers of the protest, to City officials lauded the police for their professionalism during the march itself, and heroism during the shooting afterwards. All expressed horror and sadness at the loss of five officers 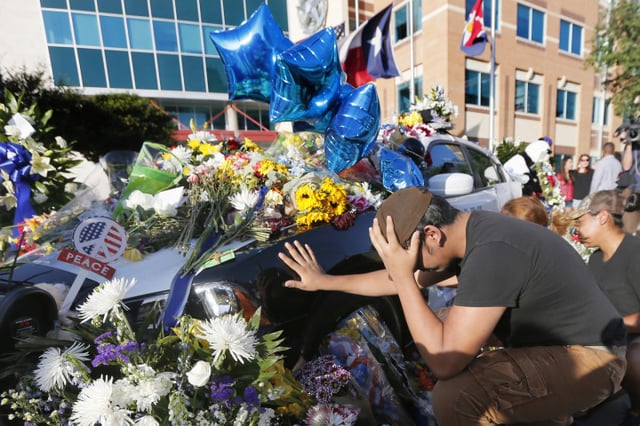 In this image from the techknowd website a man reaches out to touch the car. (Tony Gutierrez / AP)

And so the memorial continued to grow throughout the day, and quite possible will grow even further over this weekend. I hope whoever left those police cars on the plaza didn’t need to use them. I don’t think they’ll be getting them back anytime soon.

The shrine is in the front plaza of the Dallas Police Department Headquarters, at the intersection of Belleview and S Lamar Streets, Dallas, Texas.