The scrawled message was spontaneously created, but over the course of several years, the “i love you so much,” graffiti has become a South Austin landmark. T-shirts and logos of the script have come to represent the Austin vibe. The Austin American Statesman even tracked down the artist, Amy Cook.  In a video, she explained how, on what she remembers was a bad day, she reached out to express her love for her girlfriend. Without plan or promotion, the scrawled love note was embraced by neighbors and visitors alike and remains a proud icon on the side of Jo’s Coffee, South Congress Ave. 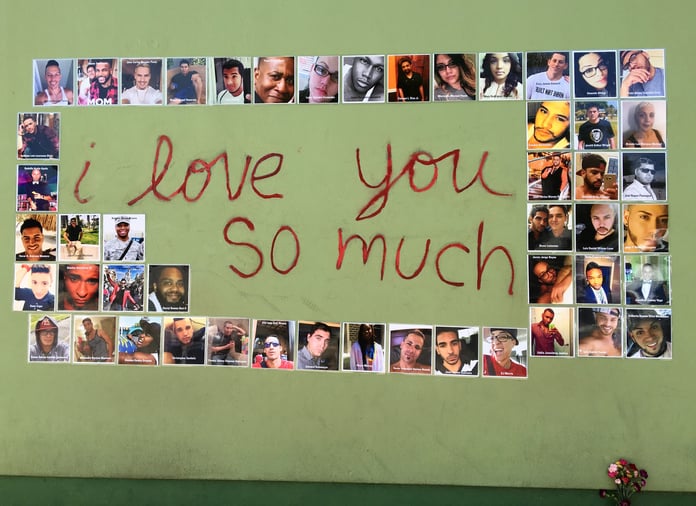 But in an amazingly effective expression of the zeitgeist, someone, perhaps someone new, made a touching addition to the landmark and it has become a memorial for the Orlando victims. My daughter sent me the first news reports on this transformation. By the end of the weekend, the local TV stations had sent reporters here. I stopped by after lunch today to see for myself.

Whoever made this addition, they weren’t spontaneous. This installation was well planned. Each of the 49 portraits has the victim’s name along the base of the photo. The author or authors took the time to laminate every portrait to be sure these images would last for a while in the hot, humid weather. A large printout was added to the right of the photos with a short bio of each individual. Many of these were taken from news reports or Facebook pages. Together, the pictures and bios personalize the tragedy. One can’t help but see image after image as young, vibrant lives cut short. And every one in proximity to that touching motto: “i love you so much.” 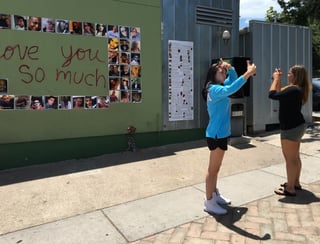 I noticed a steady stream of visitors making a pilgrimage to this place, just as I had. Some were here to pose for more on-line postings.   Others read the bios quietly or paced back and forth to take in the full effect. Someone had left a vase of flowers. In our own ways, we all were there to quietly share a connection and grieve for people we’ll never know, a half a continent away. With strategic additions, this landmark of hip Austin wasn’t so much co-opted, as it was transformed into has a truly Austin tribute to those killed in Orlando.