A bold, and some would say dangerous experiment was successfully conducted in Jerusalem in September. A group of religious leaders representing Christian, Muslim, and Jewish faiths held eight days of shared worship services together. The group gathering, given the title AMEN, was held in a communal house of prayer, a music school converted for the purpose with modest yet highly symbolic decorations. With over a year of planning, the services brought together Jewish rabbis, a Catholic priest, a Franciscan monk, a Coptic leader, and several Muslim imams who worked together to create a shared worship service in the shared setting. 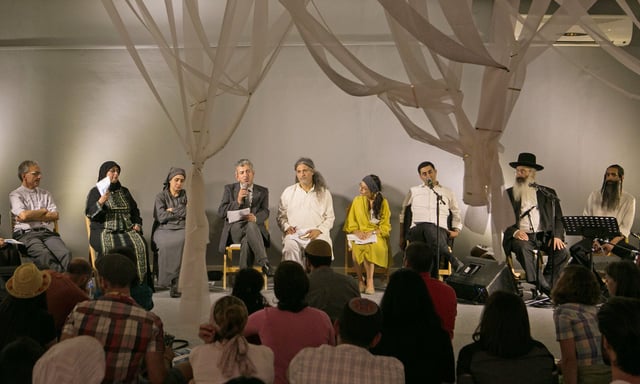 Each day, one religious leader would host, leading the assembly from their own faith tradition. The prayer book used for the event was written in Hebrew, Arabic, and English. Music and song was a feature in all of the services. After the first day’s service, the organizers were already looking ahead to continuing opportunities for faith communities to worship together. Organizer Rabba Tamar Elad-Abblebaum is quoted in the Guardian: ““You realized suddenly we were all speaking the same language….We will use this as the seed to build Jerusalem a permanent place where all faiths can come and pray alongside each other.”

In Jerusalem, where nearly any act or image can have deep political or religious associations, the place for this service was carefully chosen. The location was a small music school that teaches both Jews and Arabs. The building sits adjacent to Mount Zion, a sacred site for Christians, Jews, and Muslims alike.

Worshippers bundle together narrow banners with written prayers from all three faiths.  From the Guardian. Photograph: Michal Fattal

All three faiths also have marvelous art and visual traditions connected to the holy city of Jerusalem. The organizers opted instead for the minimalist approach. The congregation was seated on the floor, while the faith leaders and musicians used simple chairs. From the ceiling, strands of muslin fabric were hung, each with a prayer written from one of the faith traditions. Worshippers arrived and wove the strands together as they prepared to blend their voices in song and prayer.